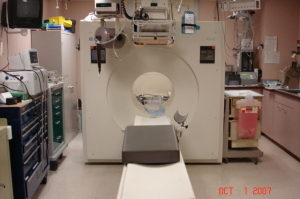 "We had a scanner in that unit for 12 years that outlived its lifespan. We needed to replace it," said Joel Perlmutter, MD, a neurologist and professor of radiology. Perlmutter conducts research on movement disorders, cognition and dementia at the med school, which is adjacent to Barnes-Jewish Hospital. (Support for purchasing the scanner in July 2007 came from Barnes-Jewish Hospital Foundation, the NIH, and the departments of neurology and radiology at Washington University.)

"It was cheaper to buy a used one than a new one, that's one reason [we chose used equipment]," Dr. Perlmutter said. "But more important, this [Siemens HR Plus] PET scanner was similar in performance to our old scanner but also very reliable, which would permit us to continue longitudinal studies."

He admits that he was reluctant at first to use an independent service organization, but Marquis Medical won him over with their expertise in PET.

"I had some hesitation initially because we normally purchase scanners from big companies and we've always purchased new scanners. This was a new foray with some trepidation....We talked with [Marquis Medical] and they came up with a price that was better than Siemens'. They identified this scanner and worked so smoothly with us... We were able to test it prior to purchasing it, evaluate it, and that gave us great comfort.... we do all kinds of serious testing to make sure it meets our very rigorous specs."

The replacement scanner was deinstalled from a hospital in Charleston, S.C. that upgraded to a new machine.

Installing a PET scanner isn't so simple but Marquis Medical handled the task like a pro. "The installation took place in an ICU, which did create challenges," said Joseph Sciarra, Vice President of Marquis Medical, Howell, N.J. "You have to be very aware of where you are; noise and dust have to be kept to a minimum; clutter in the hallways is not acceptable; you have to be sensitive to family members you walk past. We did take the old scanner out and it is being stored in our warehouse." The company is a PET service provider specializing in Siemens PET and PET/CT including maintenance agreements, installation, support, sales, and parts.

The customer, a finicky researcher, is very satisfied. "We are really pleased with Marquis Medical; we think they did a wonderful job....With outstanding site planning and installation this was the smoothest installation I have ever seen," Perlmutter said. "Within four days they had removed our old scanner and installed the replacement scanner. It was operational. My imaging physicist did the testing on it within the next few days and it passed with flying colors. And we were operating within two weeks which is nearly unheard of for a research place."

Now, the facility's important work continues, including research on acute head injuries. "A PET scanner is way of measuring radioactivity distribution within the body and specifically for us within the brain. If we administer a radiopharmaceutical, we can see it go into the brain and how it changes over time. That permits us to measure brain function rather than just structure," Dr. Perlmutter explained. "It's used for movement disorder research, cognitive research, stroke, Alzheimer's, and epilepsy....Researchers are figuring out the path of physiology and changes in the brain associated with different conditions, and trying to develop new treatments for acute brain injuries including acute stroke."

Given the particulars of their challenging job, it's interesting how the researchers chose an independent service organization for their PET needs. "At first we didn't follow up, but knew we better find out what all the options are," Perlmutter reflected, like a true scientist.