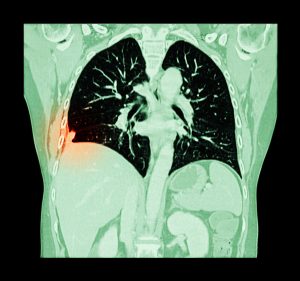 Air pollution from climate change
has been found to accelerate
the progression of emphysema
Taking a deep breath of the air around you may not be the best thing for your lungs, according to a new study.

A series of CT scans have revealed that air pollution, especially ozone air pollution, is accelerating the severity of emphysema of the lung, with some levels of progression roughly equal to smoking a pack of cigarettes daily for 29 years.

“In this cohort we began collecting CT images initially to look at coronary artery calcifications and then were able to adapt these images to assess emphysema-like changes in the lung tissue," the study’s senior co-author, Dr. Joel Kaufman, a professor of environmental and occupational health sciences and epidemiology in the School of Public Health at the University of Washington, told HCB News. "We will continue to work to understand the relationship in this cohort, as well as in cohorts that include more smokers to better understand those associations and potential interactions. We also need to understand what are the factors that work to make these associations stronger or less strong."

The research is the first example of the association between long-term exposure to all major air pollutants, and an increase in emphysema on lung scans, with past studies connecting them to some heart and lung diseases, according to the authors, who chalk the rise in pollution up to climate change. Ozone, which is produced when ultraviolet light reacts with pollutants from fossil fuels, is listed as particularly concerning.

Those exposed to ambient ozone levels that were three parts per billion higher where they lived compared to another location over 10 years were at about the same risk of increased emphysema as a person who smoked a pack of cigarettes a day for 29 years. The study also found that such levels are reaching this amount in major U.S. cities.

Surveying over 15,000 CT scans from 7,000 patients, the 18-year study examined their exposure to air pollution between 2000 and 2018 in Chicago, Winston-Salem, Baltimore, Los Angeles, St. Paul, and New York. To do this, researchers developed novel and accurate methods for measuring exposure to air pollution and applied them over the years in these cities and in the homes of many of the participants, who were drawn from the Multi-Ethnic Study of Atherosclerosis (MESA) Air and Lung studies. Measurements of emphysema were based on CT scans that identified holes in the small air sacs of the lungs and lung function tests that measured speed and amount of breath breathed in and out.

While the study connects a decline in most airborne pollutants to efforts to reduce them, it notes that ozone is increasing, with annual average levels in the metropolitan areas examined found to be between 10 and 225 parts per billion.

"Air pollution is a problem that everyone faces, and ozone air pollution is actually generally higher outside of city centers since it takes a while for the ozone precursors to travel and interact with sunlight to create ozone," said Kaufman. "The best advice is to understand that public policy decisions around air quality and the changing climate are important and affect everyone."

The findings were published in JAMA.