My report from NCBA 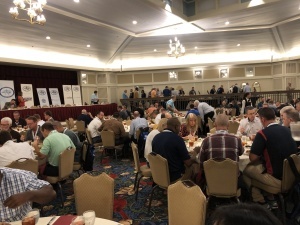 This was the 41st meeting of the NCBA. The luncheon was fully attended and the current president, Mr. David Wilson, opened the meeting reminding everyone that the success of the association is due to the statewide support of the engineering teams, and because management allows the engineers to participate.

Terry Morris is the current treasurer and offered a favorable financial report.

There was a big emphasis on education. Brian Lefler spoke on the educational activities and how those efforts help the members.

Next was a report on membership by Jeremy Collins, who said the NCBA has 423 members and 192 corporate members.... Wow!

David Wilson decided to give out two President's Awards. He said he could not decide on one so he gave two because he is the president and that was his prerogative.

One award went to Brian Lefler and the other to Jeremy Collins.

Glenn Scales, a past president, awarded the President's Gavel award to David Wilson to acknowledge all of the work he has done for the association.

David Wilson made a plea to younger members to join the board before nominations for the board were tendered.

The vendor show was well attended and the event venue, the Pinehurst Country Club, was just great!