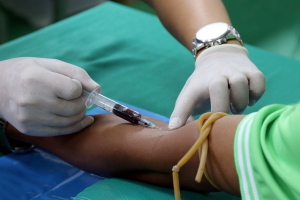 That’s what researchers at the University of California, San Francisco are saying in a new study which showed greater accuracy in identifying concussions with a specific blood test, rather than a CT exam, allowing patients to be evaluated for long-term complications. In addition, such a test costs a fraction of that of a brain scan.

"Our earlier research has shown that even in the best trauma centers, patients with TBI are not getting the care they need," said Geoffrey Manley, senior author of the study, professor of neurosurgery at UCSF and a member of the Weill Institutes for Neurosciences, said in a statement. "Now we know that many of these patients with TBI are not even getting a diagnosis."

Many patients suspected of having concussions receive normal CT scans and are discharged without follow-up. MR scans, while more sensitive and able to offer a more definitive diagnosis, are more expensive and less widely available. Clinicians, however, can draw blood from a patient and measure within it the amount of glial fibrillary acidic protein, a marker related to traumatic brain injury (TBI).

Researchers tracked 450 patients with suspected TBI in 18 level 1 trauma centers across the country, all of whom received normal CT scans. The patients received the blood test, which was carried out using i-STAT Alinity, a handheld portable blood analyzer designed by Abbott Laboratories to produce results in minutes.

Comparing the findings of the blood test to MR results, the team found that 120 had TBI. They also compared the CT-negative TBI results confirmed by MR with a group of healthy participants and a cohort of patients with orthopedic injuries. They found that the average protein value of blood samples of patients with positive MRs was 31.6 times higher than those with orthopedic injuries and nearly 52 times that of healthy participants. The protein was even higher in patients with normal MRIs, indicating that the test may be able to identify injuries undetectable with MR.

The study is derived from an earlier TRACK-TBI pilot study that found approximately 30 percent of concussion patients with negative CTs but positive MRs to be disabled three months after their injuries.

If made available, the test is expected to help clinicians determine which patients do not require a CT scan, thereby avoiding unnecessary radiation exposure. It also may be helpful for patients in trauma centers and emergency departments, whose symptoms may be altered by substance use; and those with co-existing conditions or who take medications that impact speech and behavior.

"These blood-based biomarkers are the next step in the evolution of diagnosing and treating TBI," said Manley. "We are finding that not only are they more sensitive than CT in identifying TBI, but they may be more accurate than the current standard of MR."

The study was funded by the National Institute of Neurological Disorders and Stroke, and the U.S. Department of Defense.

The findings were published in The Lancet Neurology.