I lost my phone in Spain 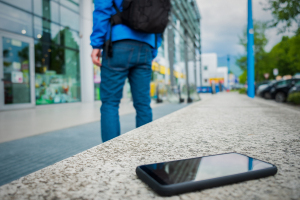 I was in Spain for the IAMERS meeting and took a few extra days with Barbara. We drove to Zaragoza and then to Barcelona.

While there I laid down my phone and forgot it. My phone has a case where I store my credit cards and my driver's license. It is good that I had cash because when it was time to pay I learned that I had no phone and no credit cards.

I used Barbara's phone to turn off my credit cards and then I used "Find My iPhone" to send a message to my phone. I could see my phone and my driver's license driving away from the city center. And then someone called my wife's phone and told me he had my phone.

He had to pick up his daughter and, through a young translator I met on the street, he said he would come to my hotel and return my phone.

I had to force him to accept a reward.

What does this have to do with healthcare you ask?? Nothing, except that it has a lot to do with human nature. There are still honest people in the world, in fact I believe that most people are honest.