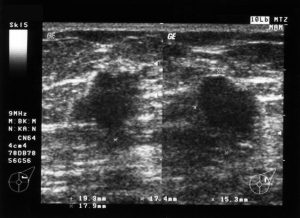 That is the consensus reached in a new study led by Dr. Elizabeth H. Dibble, a radiologist, and clinician educator and assistant professor of diagnostic imaging at the Warren Alpert Medical School of Brown University.

"DBT increases cancer detection rate compared to DM. Because DBT can reduce overlapping tissue, it can reveal cancers that might have been missed with DM, which is of particular benefit in women with dense breast tissue," she said. "We also know that supplemental dense breast ultrasound screening can detect additional cancers in women that were missed on DM. What we did not know before our study was whether ultrasound detected a similar number of mammographically occult cancers after women had undergone DBT screening compared to after DM screening."

The findings were based on 2,183 screening breast US exams from between October 2014 and September 2016 that were collected from databases at two tertiary breast imaging centers and an office practice. A total of 1,434 (45.1 percent) were US after DM procedures and 1,668 (52.4 percent) were US after DBT exams, with the BI-RADS assessment category for each being listed as either 4 or 5 studies. Eighty-one (2.5 percent) had no prior mammograms available.

"This was a single center, retrospective study, and dense breast ultrasound screening is performed at patient or provider request rather than as population-based screening. Multicenter studies with prospective data collection of population screening would be helpful for confirming our findings," said Dibble. "In addition, we only looked cancer detection in this study."

Dibble and her team plan to present two years of follow-up data on patients who had findings on dense breast ultrasound screening after DBT versus DM that were not biopsied but rather followed with serial ultrasound at the 2019 Radiological Society of North America (RSNA). Those results are currently being written up for publication.

The findings of this study were published in the December edition of the American Journal of Roentgenology.