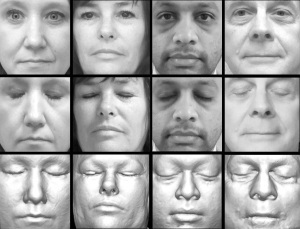 Facial recognition software could be used to
identify patients based on brain MR scans.
(Photo credit: New England Journal of Medicine)
Removing data from medical image files may not be enough to protect the identities of patients with MR scans in publicly available research databases.

Researchers at Mayo Clinic have found the use of commercial facial recognition software can identify a person from brain MR scans that include images of their face. Such breaches could theoretically lead to instances of identity theft, as well as the disclosure of personal details such as diagnosis, genetic data and results of other imaging exams. So far, no such incidents have been reported.

"We are examining this problem and working on solutions, because the risk will grow with improving technologies and increased sharing of medical research data," Dr. Christopher Schwarz, a Mayo Clinic researcher and computer scientist in the Center for Advanced Imaging Research, and the study's lead author, told HCB News. "We are being proactive to protect participants before such a breach occurs."

Participation in research studies is how imaging data becomes accessible to the public, though researchers are usually required to sign a data-use agreement in which they pledge to not try to identify participants. In addition, many abide by current day standards for sharing MR scans in research, which ask for the removal of identifiers such as names and identification numbers.

Imagery of the face included in the scan, however, remains accessible, and while software programs for removing or blurring faces in MRs have been around for years, their use is avoided due to their reducing the ability of researchers to automatically measure brain structures from images. Using them also does not guarantee that patients will not be identified.

In a study of 84 volunteers, the team evaluated the ability of these programs to identify patients from brain MR images captured within the past three months. They created facial reconstruction images from each MR scan and tried to match them, using publicly available facial recognition software, to photographs of the volunteers.

The software chose the correct MR image as the greatest match to a photograph for 70 of the 84 participants, a success rate of 83 percent. The correct MR image was ranked among the top five possible matches for a photo in 80 of 84 cases, making the software accurate 95 percent of the time.

The team plans to publish a manuscript on a potential solution it is developing and how it may improve on existing privacy protection efforts.

Research was funded by National Institutes of Health grants, the GHR Foundation, the Elsie and Marvin Dekelboum Family Foundation, the Alexander Family Alzheimer's Disease Research Professorship of Mayo Clinic, the Liston Award, the Schuler Foundation, and Mayo Foundation for Medical Education and Research.