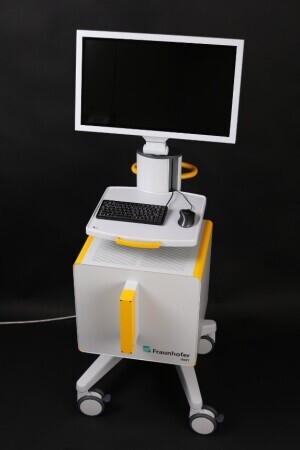 DiPhAS KoMBUS, an MR-compatible ultrasound system
Researchers in Germany are looking to reduce the burden of MR scans during biopsies with the construction of a new dual-imaging solution.

Known as DiPhAS KoMBUS, the aim behind the MR-compatible, 256-channel ultrasound system is to reduce the numerous MR scans required during biopsy procedures to just one, with ultrasound incorporated to plan the needle path and actual tissue biopsy, according to its developers at the Fraunhofer Institute for Biomedical Engineering IBMT.

“At present, the patient is given an initial MR scan and then removed from the scanner,” Dr. Marc Fournelle, a scientist at the institute, said in a statement. “On the basis of this scan, the doctor now plans the needle path during the biopsy. The needle is then inserted a little way into the patient’s body, and a second scan is taken in order to monitor the position of the needle. The doctor successively advances the needle into the patient’s body, pausing after each step in order to conduct another MR scan so as to check the position of the needle.”

In reducing MR scanner time, the objective of the project is to increase patient comfort and reduce costs associated with diagnosis. To do so, the system produces ultrasound images in parallel to MR scans, mapping each on one another and providing the physician an MR image of the patient’s current breathing phase, even though the patient is no longer in the MR scanner.

It starts by simultaneously capturing both ultrasound and MR images over several breathing cycles while the patient undergoes an MR exam. An MR scan is conducted for each breathing phase, producing a corresponding image that enables visualization of low-contrast lesions when scanning with ultrasound. Special algorithms within the solution then identify the current breathing phase on the basis of the live ultrasound images, and search through recorded MR data sets for scans that correlate to that exact phase. The clinician can then use the combined high-contrast MR images and live ultrasounds scans to create the needle pathway, without having to subject the patient to additional MR exams.

Tracking patient motion is carried out with one of two ultrasound probes that is fastened to the body to generate live images of the movement of inner organs. The other, a handheld, is used for real-time monitoring of the needle position following the MR scan. The pathway of the needle is mapped out by a software program within the system that was developed at Fraunhofer MEVIS in Bremen. It tells users when the patient is in the correct breathing phase, and displays the MR scan corresponding to the actual phase. It also proposes an optimal needle path, including the needle target and angle of approach. Other components include an MR-compatible monitor and MR-compatible multichannel ultrasound electronics.
1(current)
2