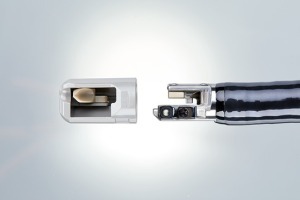 The Pentax ED34-i10T2 duodenoscope Courtesy: Pentax
The U.S. Food and Drug Administration has given a green light to a duodenoscope with a sterile, disposable elevator tip — the Pentax Medical Video ED34-i10T2.

“Duodenoscopes with a disposable elevator component represent another major step toward lowering the risk of infection among patients who undergo procedures with these devices,” Dr. Jeff Shuren, director of the FDA’s Center for Devices and Radiological Health, said in a statement.

The agency had made a top priority of boosting the safety of the tough-to-clean devices. And it had called the elevator “a part that has been traditionally difficult to clean and reprocess.”

In 2013, the agency discovered that there was a link between multi-drug-resistant bacteria and duodenoscopes — despite the fact that users were following the manufacturer-recommended cleaning procedures.

In August, the agency released a safety communication recommending that duodenoscope manufacturers and health care facilities transition to duodenoscopes with disposable components.

At the same time the agency acknowledged that such a shift will not happen overnight.

The newer-design end caps aim to improve cleaning. With fixed-end cap duodenoscopes, a plastic or rubber cap is glued to the metal edges around the distal end and may prevent tissue damage but also limits accessibility for cleaning.

In April, postmarket studies on contamination rates after cleaning and reprocessing of Olympus, Fujifilm and Pentax duodenoscopes showed that “up to 5.4 percent of all properly collected samples tested positive for 'high concern' organisms, which is significantly higher than the earlier results,” according to Shuren in a statement at the time.

And in December, 2018, the agency found a 3 percent contamination rate for “high concern” organisms, such as E. coli or Staphylococcus aureus.

While improvements in reprocessing have “yielded improvements,” he stated at the time, “we also received reports of three deaths of U.S. patients in 2018 that were related to infections associated with duodenoscopes. That’s three deaths too many.”

Beyond that, as many as 3.6 percent of samples tested positive for low to moderate concern organisms. “While these organisms don’t usually lead to dangerous infections, they are indicative of a reprocessing failure,” the FDA noted, adding that when the sampling studies were first launched, the agency “expected to see a total contamination rate for any type of organism of less than 1 percent or as close to zero as possible for duodenoscopes.”