Italian Physicians Show How Stem Cells Can Be Used

Italian Physicians Show How Stem Cells Can Be Used 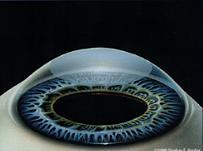 Professor De Luca
and his team
cultured a new
cornea from a
small sample of
limbar stem cells
taken from
a healthy eye.
Physicians in Italy have shown how stem cells can be utilized to treat damaged eyes and with gene therapy, and also treat an uncommon and debilitating skin disease. Professor Michele De Luca of the University of Modena and Reggio Emilia have shown that cells of the cornea are constantly being replaced by new cells from an area surrounding the cornea called the limbus. The cells differentiate into corneal epithelium and migrate to the cornea. When the cornea is severely damaged, it may need a transplant, and a transplant is only successful if the limbus has remained intact to replenish the new cells. If the limbus is destroyed, there is little chance that the transplant will succeed.

Professor De Luca and his team, by removing a small sample of limbar stem cells taken from the healthy eye, have cultured a new cornea and successfully grated it on to a damaged eye. Out of 240 patients, the cornea regenerated successfully in 70 percent.

The researchers were also able to perform a small trial on a patient who has a rare, debilitating genetic disease of the skin - Epidermolysis Bullosa, in which highly fragile skin is prone to blistering because of faulty proteins that anchor surface layers of the skin to the body. There is one form of this disease that has a mutation in one of the anchoring proteins called laminin 5. The researchers used skin holoclones (most people have around seven and 10 percent of holoclones). The patient used in the trial had fewer because the skin was so badly damaged. A few were found in the palms of the patient's hand and they were cultured from a biopsy. DeLuca's team then used gene therapy to insert the correct laminin gene into the growing cells and grafted the new tissue onto the patient's body. It was successful, and after several months, there has been no blistering or flaking.