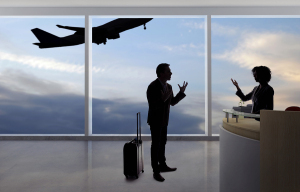 Have you ever stood in line behind someone at the airport who was complaining to the overworked airline employee because they felt as though they were more entitled than the rest of us?

We've all seen it, they raise their voice, they scream, they act in a condescending way. They feel special, better than the rest of us who stand patiently waiting for the crew to arrive or the airplane to land or the weather to pass.

I get a special kick out of people who blame the airlines when there's a snowstorm.

I call these people Entitled Complainers. They complain and they feel as though they are entitled.

At this time of year it's important to remember how lucky we are. Most of us, probably everyone reading this, has a warm bed and enough food and probably a comfortable car and good job and many other blessings.

Whether you are waiting in line at the grocery store or at the airport or at the train station or to get your car repaired please remain calm. Remember how lucky you are. Think about your family and all of your blessings.

I guess the best way to say it is don't sweat the small stuff, and it's all small stuff!