Australian fires and their impact on healthcare 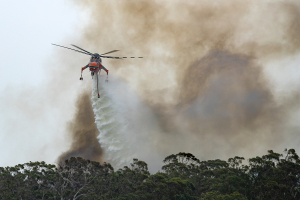 All of us are watching the fires in Australia in the news and as we sit here in North America, it may not seem real to us.

We may have heard the statistic that over 500,000,000 animals died in the fire and that people are losing their homes. We may have seen pictures of Australia from outer space, showing flames spread across the country.

It almost does not seem real.

Apparently hospitals are filled with smoke. MRIs shut down because of the intense heat and the smoke polluting the system. Babies are being born in smoke filled rooms. Essential operations cannot be performed and people are suffering respiratory symptoms.

It has to seem like the end of the world to the average Australian.

Some would say it is as a result of climate change. Others, overpopulation, or allowing the underbrush to grow, rather than let nature burn it off.

Whatever is causing it, it is a serious problem and it is impacting everyone. Imagine if you couldn't get to the hospital because the road was closed, or if when you got there, you couldn't receive treatment because the rooms were all filled with smoke.

I am not sure I have an answer, as a matter of fact, I am sure I do not. But it is a serious problem and let's all take a minute and say a prayer for our friends in Australia.