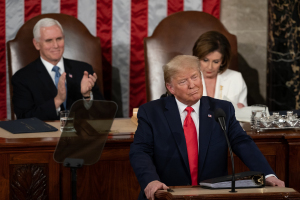 By the White House from Washington, DC - State of the Union 2020, Public Domain
I see that President Trump was acquitted today. I guess that's not a surprise.

Last night during the State of the Union address President Trump told us that he was going to protect coverage for preexisting conditions, but I also understand there is a court battle trying to overturn the Affordable Care Act.

What's going to happen with healthcare is anybody's guess. What impact will it have on the medical equipment industry? How will it impact hospitals?

A lot of my friends believe that although the president is impulsive, at the end of the day he's making a positive impact on the country and the economy. There are others who feel that his impulsiveness means that there could be unforeseen consequences.

I believe that John Q. Public cares a lot about healthcare. Regular people worry about getting older and whether or not the demands on the healthcare industry will exceed healthcare's ability to meet the needs of the general public.

I'm hoping that the president feels empowered and takes his time and comes up with a plan that is well considered. If not, I'm afraid that in another few years we'll have to revamp healthcare all over again.