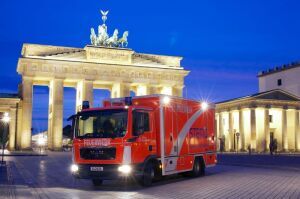 German researchers found that prehospital treatment in specialized ambulances that are equipped with CT scanners and labs specifically designed for stroke treatment reduced the likelihood and severity of disability as well as death, compared to administering treatment to patients upon arrival at the hospital in a conventional ambulance. The name of their investigation was the Berlin Prehospital or Usual Delivery (B_PROUD) trial.

“While we had anticipated better outcomes in the patients treated in the mobile stroke units, we are amazed by the magnitude of the effects,” said lead study author Heinrich Audebert, professor in the department of neurology and Center for Stroke Research at Charité Universitätsmedizin in Berlin, in a statement. “It is obvious that clot-busting treatment is most effective if it is applied in the ultra-early phase of stroke — ideally within the first or ‘golden hour’ of symptom onset.”

The trial consisted of 749 patients in the metropolitan area of Berlin who were assigned to treatment based on the availability of three mobile stroke units, and 794 who received conventional care. The average age for mobile stroke unit patients was 73, and 46% were female. The average age for patients treated with conventional care was 74, with 48% female.

Prehospital treatment consisted of administering alteplase, a medication for dissolving clots blocking blood flow in or to the brain, which leads to ischemic stroke. Experts say it should be administered within 4.5 hours of stroke symptoms.

Researchers applied the medication to 60 percent of patients assigned to a mobile stroke unit and to 48 percent of patients who underwent conventional care. For those treated in mobile units, the likelihood and severity of disability as well as death at three months decreased by 26%, compared to those who received treatment at the hospital. In addition, the mobile stroke units decreased time of treatment by an average of 20 minutes.

“Stroke treatment is more effective the earlier it starts,” he said. “Just waiting until the patient arrives at the hospital is not enough anymore.”

The study was funded by the German Research Foundation and the Ministry of Education and Research.

The findings were presented at the American Stroke Association’s International Stroke Conference 2020, which was held Feb. 19-21 in Los Angeles.