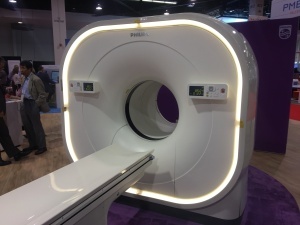 PET scan volume has risen by 6% annually since 2013. Photo: Vereos Digital PET/CT scanner from Philips at SNMMI 2019
PET scan volumes in the U.S. have been on an upward trajectory since 2013, growing at about 6% per year.

That’s what IMV’s 2020 PET Imaging Market Summary Report says, claiming that 2,200,800 clinical PET scans took place in 2019 at U.S. hospital and not-hospital settings with both fixed and mobile PET imaging systems. The estimate marks the highest recording of PET scans ever performed in the U.S., and is expected to rise by 6-7% in 2020.

PET systems are primarily used for oncology procedures to diagnose the extent of cancer and ongoing patient management, particularly in those with lung, Hodgkins/lymphoma, and breast cancer.

The development of PET/CT scanners has further increased adoption of the modality since the early 2000s, with an estimated 2,370 sites performing PET scans in the U.S. Sixty percent of these sites use fixed PET imaging units, including PET-only, PET/CT and PET/MR scanners, while the other 40% use mobile PET services that stop at their facilities for several days each month. Such sites are slow to adopt fixed units on account of reimbursements and the relatively "stable" market for oncology scans. Adopting, however, would not increase but steal volume from other providers, according to the report.

Further driving the market is the volume of PET cardiology scans, which have more than doubled between 2014 and 2019. These procedures, however, make up only 8% of the total PET scans performed in 2019, and only 11% of sites currently perform cardiology PET scans, primarily for myocardial perfusion. In contrast, neurology scans constituted only three percent of PET scan volume in 2019 despite being performed by a higher 38% of PET sites, mainly for patients with suspected Alzheimer’s disease or dementia.

PET scan volume, while at its highest, is only used in 2% of the 91.4 million CT scans performed on CT-only scanners in the U.S. These systems are not "primary care" modalities, and are used on patients suspected of having cancer based on other tests.

Inhibiting faster growth is the adoption of “appropriate use” criteria and CMS, which mandates that physicians utilize a clinical decision support system for ordering imaging studies to ensure appropriate use of imaging resources and minimize over-utilization, in accordance with the Protecting Access to Medicare Act of 2014 (PAMA). Further challenges have been put forth by third-party insurers’ limited reimbursement approvals, through their pre-authorization processes.

The modality, however, has shown potential for growth in a number of areas, including prostate cancer, neuroendocrine tumors, bone studies using sodium fluoride (NaF18), neuroimaging agents to detect beta-amyloid plaque for Alzheimer’s disease, and simulation for radiotherapy treatment planning.

IMV recently reported similar reports on CT procedure volumes, which consisted of more than 90 million in 2019, and MR procedure volume, which rose by 8% from 2018 to 2019.

“Departments need to work closely with their referring physicians so that what they refer is the right technology for the physician,” said Young when discussing safety and screening for MR scans. “That’s a lot of communication, standards and appropriate use criteria from the department to the referring physicians. The more they can do that, the better they can manage their patient volume and do what’s appropriate for the patient.”