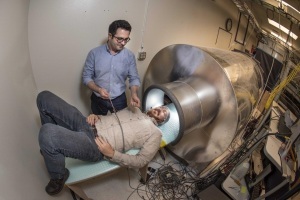 Sandia National Laboratories is designing a more comfortable, accessible and possibly more accurate MEG system.
Undergoing magnetoencephalography (MEG) requires patients to remain still in rigid, helmet-like domes for long periods of time. Such a task can be difficult for many, including children, people with chronic pain, and those with motor disorders such as Parkinson’s disease.

Sandia National Laboratories in New Mexico is hoping to create a more comfortable, accessible — and potentially more accurate — version, and is now set to build a first prototype of such a system thanks to a $6 million contribution from the National Institutes of Health.

“Currently the only MEG system available to clinicians is based on superconducting technology; due to its initial cost and maintenance, these units are employed at a limited number of clinics and institutes,” Sandia MEG scientist Amir Borna, lead author on a paper describing the proposed system, told HCB News. “Our type of MEG system may see adoption by a larger number of institutes as initial cost and maintenance requirements are reduced, thereby providing access to larger data sets connecting clinical diagnosis to MEG brain scans.”

A noninvasive brain scan, MEG is used to locate sources of epilepsy as well as study brain development, Alzheimer’s disease and stroke. With a more wearable device, patients could relax and move into comfortable positions during procedures, which, according to Stephen, would open up testing to more people and eliminate data distinctions between patient groups. It also would create more accurate measurements in children due to the new system fitting closer than a one-size-fits-all helmet, preventing a decrease in signals measured from the brain due to distance.

Current MEG systems require superconducting sensors, which use containers of liquid helium. This in effect forces designers to fix the sensors in place. Sandia plans to address this issue by designing in-house sensor technology that works at room temperature and does not require liquid helium.

The system is based on an optically pumped magnetometer, a type of quantum sensor that pinpoints brain signals with the same accuracy as a superconductor-based machine. It does so using a laser to turn rubidium gas into a tiny cloud of atomic magnets that, when in a magnetic field, spin like tops. A patch of these sensors are placed directly against a person’s head inside a magnetically shielded tube resembling an MR system. A second laser measures changes in each cloud to infer a naturally occurring but barely perceptible magnetic field immediately outside the person's head, created by the electrical currents in the brain. The magnetic field map is then inverted to give the location of brain activity.
1(current)
2