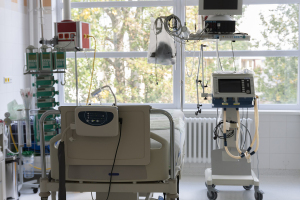 A new report suggests that the Strategic National Stockpile of ventilators could be just a drop in the bucket compared to the amount of units required in the U.S. to combat COVID-19.

The total number of the lifesaving machines that are stockpiled is just about 16,600, according to a Center for Public Integrity (CPI) report. To put this figure in perspective, the healthcare system in the U.S. already has about 160,000 ventilators. If COVID-19 is as bad as the 1918 Spanish Flu, a Johns Hopkins estimate has determined that up to 742,000 patients in the U.S. could need ventilators — and a more moderate wave could still mean that over 64,000 would be needed.

The Strategic National Stockpile (SNS) number, confirmed to Integrity by an unnamed U.S. HHS official involved with the program, was not exactly a secret — until the latest administration.

“All of a sudden that number has become protected infrastructure information for some reason,” Richard Branson, of the University of Cincinnati Medical Center, who has worked with government officials in stockpile allocation planning for emergencies, told CPI authors.

Branson told center reporters that he met with federal officials in the past who wanted to more than double the ventilators in the reserve and that in 2014 a $13.8 million government contract was given to Philips Respironics to come up with a new model respirator, but no versions had in fact been produced or bought of what was known as the Advanced All Hazard Stockpile Ventilator.

The SNS was started in 1999, initially in case there was a mass attack in the U.S. with weapons of mass destruction.

“The reality is, the stockpile could never have enough money to be the immediate fallback for everybody, and nobody does anything themselves,” Greg Burel, who was director of the stockpile until he left in January, told Integrity writers.

In H1N1 flu in 2009, which killed 12,000 in the U.S., got the attention of Congress, which approved $7.7 billion in special funding, and instructed Burel to make it ready for a pandemic as well as other mass casualty events. There were just 4,000 ventilators stashed in the reserve, according the CDC's Eileen M. Malatino, in a review published in 2008 in the journal Respiratory Care, in which she detailed both the numbers and types of units in the stockpile at the time.
1(current)
2