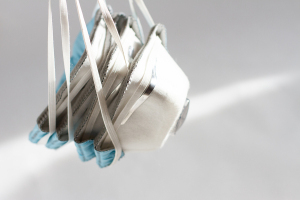 Hospital bosses at Newark Beth Israel Medical Center have suspended intensive care nurse Olga Matievskaya for handing out PPE gear she got on eBay with money she raised on GoFundMe, according to a ProPublica report.

While grateful colleagues thanked her, the hospital did not, instead punishing her for handing out “unauthorized” protective gear.

While Matievskaya didn't fault hospital authorities on the record when she spoke to ProPublica, four other Newark Beth Israel nurses told the investigative group that the gear shortage was severe — and one told the news group that “there was no information distributed” banning purchases of supplies for others.

It also claimed that it followed guidance from the CDC and that, “we are working 24 hours a day, 7 days a week to ensure that the appropriate PPE gets to the right staff, at the right time.”

While the hospital may claim that gear is available, the four nurses told ProPublica that they often lacked N95 masks and one ICU nurse told the news group that for one shift all she got was a surgical mask, which she noted, is “like putting a paper towel over your face.”

In fact, some ICU healthcare workers got just one surgical mask in a brown bag to use for an entire week, according to one of the nurses.

“We understand this is what we signed up for,” one of the ICU nurses told ProPublica. “Just provide us with sufficient (protective equipment) so we can give these patients the optimal care that they need, and so we aren’t contaminating others or ourselves.”

The hospital's COO Dr. Matthew Schreiber responded to the claims by telling the reporting team that workers get the equipment “that the staff require, which is at times not the same as the [protective equipment] that people want to have. There’s lots of items people may bring from somewhere else.”

Newark Beth Israel is far from the only healthcare institution with concerned workers — especially as so many are now being felled by COVID-19.

In fact, more than 2,200 healthcare workers at two of Metro Detroit’s hospital systems are now symptomatic of the virus. As of yesterday, Beaumont Health, the largest healthcare system in the state of Michigan, revealed that 1,500 of its 38,000 employees are home with virus symptoms, and the Henry Ford Health System reported that 734 of its 31,600 employees have tested positive for the virus.

That's 2.1% of the five-hospital system’s workforce.

At least 3,768 patients were hospitalized for COVID-19 in Michigan as of Saturday, with 89% in Metro Detroit and 1,383 on ventilators.