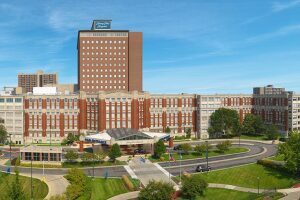 Beaumont Health, the largest healthcare system in the state of Michigan, reports that 1,500 of its 38,000 employees are home with symptoms of COVID-19. Detroit’s Henry Ford Health System likewise reports that 734 of its 31,600 employees have tested positive for the virus, representing 2.1% of the five-hospital system’s workforce, according to The Detroit News.

"As a health system caring for a large majority of our region's COVID-19 patients, we know we are not immune to potential exposure, and we remain grateful for the courage and dedication of our entire team," Dr. Adnan Munkarah, chief clinical officer at Henry Ford, told the newspaper.

More than 80% of the 17,220 cases in Michigan are in the Metro Detroit counties of Wayne, Oakland and Macomb, exasperating local hospitals like Henry Ford and Beaumont Health. The high number raises concerns about the threat of exposure to healthcare workers and the depleted workforce left to care for patients. It is not known at either institution if employees who contracted the virus did so at work or through community spread.

Henry Ford has tried to mitigate exposure by requiring employees and visitors to wear personal protection equipment. A few of its staff members recently released a video tutorial on how to create face masks and face shields from everyday items to reduce risk of exposure. The hospital also is prioritizing testing for employees.

Beaumont is requiring employees who show symptoms to stay home for seven days or until they are symptom-free for three days. It has so far done this with 3.9% of its workforce.

"During this period of time, we are not requiring employees to use their paid time off," Mark Geary, a spokesman for the health system, told The Detroit News.

At least 3,768 patients were hospitalized for COVID-19 in Michigan as of Saturday, with 89% in Metro Detroit and 1,383 on ventilators. The high number has worried employees, who, at times, have to reuse PPE due to expected shortages.

Beaumont’s Southfield base told employees Friday that those wishing to avoid working with COVID-19 patients would have to voluntarily resign, making them ineligible for unemployment and future re-employment within the eight-hospital system. Those with medical conditions, including pregnancy, were exempted, reported The Detroit News.

Roughly eight out of 10 of COVID-19 patients in Henry Ford’s ICU are on ventilators and on average require ventilator support for eight to nine days, according to Munkarah. He adds, however, that the number of patients has been steady and that the hospital has discharged roughly 770 who were treated for the virus.

“We are very happy to see that happening," he said.

Munkarah did not say how many staff workers had died from the virus, although a longtime registered nurse named Lisa Ewald was reported to have died last week in her home in Dearborn after testing positive for the virus. She was 53, the Detroit News reported.

A spokesperson for another eight-hospital system, Detroit Medical Center, did not have information on the number of employees who tested positive for the virus.