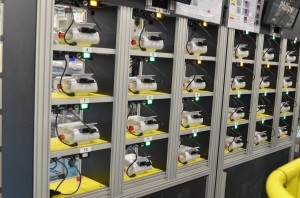 The company introduced its Philips Respironics E30 ventilator, a versatile solution designed for noninvasive and invasive ventilation. It intends to immediately produce 15,000 units per week of the model, as part of its objective to eventually produce its whole stock of ventilators at a rate of 4,000 units per week by the third quarter of 2020.

Designed for large scale production, the Philips Respironics E30 ventilator is optimized to treat patients with respiratory insufficiency and can quickly be set up for experienced respiratory care teams to complete simple operations. The easy-to-use device offers a range of skill sets to treat and monitor patients, and can be used noninvasively and invasively, making it adaptable for the treatment needs of COVID-19 patients.

Use of the device, which meets medical device quality standards, has been approved by the FDA under its Emergency Use Authorization process for the remainder of the outbreak, with production currently underway at Philips’ New Kensington site in western Pennsylvania.

Philips has recently formed a number of other partnerships, one of which is a $647 million deal with the U.S. government to double its supply of ventilators by May and produce a fourfold increase by the third quarter of 2020. It also has partnered with KLM Royal Dutch Airlines, the flag carrier of the Netherlands, to create a temporary special cargo airlift to transport medical equipment and other supplies from China to the Netherlands.