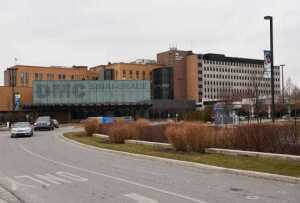 Detroit Medical Center Sinai-Grace faces one of the largest concentrations of COVID-19 patients among other hospitals in the city. (Photo courtesy of The Detroit News)
A report of bodies being stored in vacant hospital rooms at a Detroit hospital has prompted the launch of an investigation by Michigan state officials.

Governor Gretchen Whitmer announced the probe Friday in a press conference following the release of photos earlier in the week by CNN that depicted bodies stored in empty hospital rooms at Detroit Medical Center Sinai-Grace Hospital. Others also showed them stacked on top of one another in refrigerated holding units brought into the hospital’s parking lot, reported The Detroit News.

"We want to make sure that we've got the facts," said the governor, who added that the state is working to coordinate more cold storage.

The release of the photos comes one week after The Detroit News reported COVID-19 patients were dying in hallways and nurses were scrounging for body bags and places to hold the deceased.

The photos were allegedly shared among emergency room workers, according to CNN, which acquired them from an ER worker. Two other ER workers confirmed them as accurate, saying they were taken in early April during an “overwhelming” 12-hour shift in which the hospital morgue was full. The workers requested anonymity due to concern for their jobs.

In one, two bodies are shown lying side-by-side on a bed in a room that the workers say is usually used for studies on sleeping habits. Another body is placed in a chair next to the bed, with all three in white body bags.

"All I know is we ran out of beds to keep our patients on so we couldn't spare any for the bodies," said one ER worker, who witnessed the bodies in the room, adding that it was “because we hadn't gotten our outside freezers yet, so those rooms had beds and the morgue people don't work overnight.”

The incident reportedly prompted the hospital to order portable refrigerator units to store the bodies. 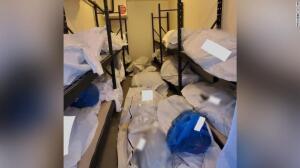 DMC Sinai-Grace has been forced to store bodies in refrigerated units located in its parking lot due to capacity issues in its morgue. (Photo courtesy of CNN)
This is shown in another photo in which body bags overlap one another in such a unit. The units are located in the hospital parking lot, and blue bags shown in the image are the personal effects of the deceased, according to two other ER workers who spoke to CNN.

"Bodies are definitely double-stacked on the floor. There is no lift to help put the bodies on the shelf," said one ER worker who had witnessed similar scenes of bodies.

The only hospital in northwest Detroit, Sinai-Grace has experienced one of the heaviest case loads of COVID-19 patients in Metro Detroit, due to the northwest corner of the city having a higher number compared to the rest of the city. The 48235 ZIP code that Sinai Grace is located in has the highest concentration, according to The Detroit News, with 724 people testing positive.

The hospital also holds proximity to a number of nursing homes, institutions that, in general, have been hit hard by the virus. In addition, morgues and funeral homes in the city have experienced capacity issues from the higher than normal number of fatalities.

Hospital spokesman Brian Taylor told CNN that "patients who pass away at our hospital are treated with respect and dignity, remaining on-site until they can be appropriately released. Like hospitals in New York and elsewhere, we have secured additional resources such as mobile refrigeration units to help temporarily manage the capacity issue caused by COVID-19."

The investigation comes at the same time as the formation of a plan by Whitmer to reopen Michigan. She plans to release more details on it this week, and asked viewers during the press conference to pause for a moment and think about the meaning behind the photos.

"There are a lot of inconvenient things about this moment that we're all living through and struggling with, but the fact that we're trying to coordinate, as well as getting masks for our front-line providers, cold storage for deceased loved ones of people ... that's what the state is working on," she said.