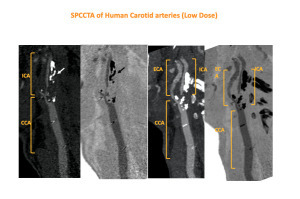 As a first-line diagnostic tool used in everything from cancer and cardiovascular disease to bone fractures, CT remains one the most cost-effective, and consequently ubiquitous, imaging modalities.

However, it is not without its disadvantages, including significantly higher dose than conventional X-ray imaging, and poor differentiation of soft tissue structures. The soft tissue imaging limitation means that for a definitive diagnosis, patients often need to be referred for more expensive imaging, such as MR or PET scans, which are typically only available in main hospitals and specialist clinics.

Supported by a 7 million EUR grant from the European Union's Horizon 2020 research and innovation program, my group at the University Claude Bernard in Lyon, France, is leading a consortium of academics, global corporations, SMEs and start-ups to develop a new technology called Spectral Photon-Counting CT (SPCCT) that will allow X-ray CT to compete with more expensive imaging modalities in terms of spatial resolution and tissue differentiation. Our aim is to bring advanced diagnostic imaging to many more diseases and people in community hospitals and private clinics at significantly lower cost.

From black-and-white to color
SPCCT imaging relies on the development of a new X-ray detector developed by Philips that is not only capable of detecting individual X-rays (photon counting information), but also capable of detecting and quantifying individual X-ray photon energies (spectral information). Photon counting has the ability to reduce the patient’s radiation dose by 30%, thereby allowing safer examinations, while at the same time achieving a spatial resolution of around 200 microns, three times better than standard CT. However, the spectral capability is what makes it truly revolutionary, because in conjunction with targeted contrast media it opens up the possibility of using SPCCT for functional (molecular) imaging. In effect we will be going from today’s black-and-white CT images to color images, in which different colors represent the X-ray absorption density of specific atomic elements - so called K-edge spectroscopy imaging.

Capturing quantitative data
At the moment we are running a clinical trial of SPCCT in patients with carotid artery stenosis to assess the additional value of increased spatial and spectral resolution in evaluating the lumen of the carotid artery and better characterizing the atherosclerotic plaque. In September we started a second clinical trial on coronary artery imaging, using the technology both as a diagnostic tool and as a means of evaluating the effectiveness of angioplasty.