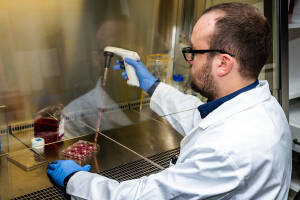 That’s what an international team of researchers found in a preclinical trial comparing the three forms of treatment, with metastases significantly reduced if the primary tumor was treated with carbon ions and immunotherapy together. Leading the group behind this research was the department of biophysics at the GSI Helmholtz Centre for Heavy Ion Research (GSI) in Germany, along with the Parthenope University of Naples in Italy and the Japanese National Institute for Radiological Sciences (NIRS-QST).

"There are several reasons and explanations why carbon ions and immunotherapy are a good match," Dr. Alexander Helm, a postdoc at GSI, told HCB News. "The most prominent hypothesis is actually the peculiar pattern of cell death, which is induced by carbon ions, as compared to conventional RT. It is hypothesized that this very cell death is more immunogenic, which will eventually lead to a more efficient activation of the immune response, subsequently leading to a better elimination of metastases. These effects, nonetheless, depend on the combination with immunotherapy to boost such immune responses."

While used for advanced malignancies and metastatic patients, immunotherapy is only effective in some types of tumors and when combined with conventional radiotherapy, and only generates a reaction from some parts of the body.

When combined with carbon ions, it stimulates the immune system for a stronger response against tumor metastases. This may, according to Helm, be due to the physical advantages of carbon ions compared to conventional photon radiation, that enable it to spare circulating immune cells in the blood as well as improved sparing of healthy tissues. The researchers say this could indicate that carbon ion therapy is more immunogenic and could trigger a stronger immune response than conventional radiotherapy, even when combined with immunotherapy.

The authors investigated this concept using the accelerator at NIRS-QST in Japan where they applied carbon ions and conventional X-rays in a mouse model with osteosarcoma as the primary tumor. While similar results were found with carbon ions and X-rays when each was combined with immunotherapy, carbon ion radiation followed by immunotherapy reduced the primary tumor significantly. They also found it showed a greater ability in controlling lung metastases than conventional radiation and immunotherapy alone and together.
1(current)
2