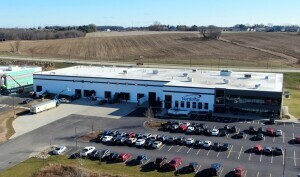 The pair are expected to help the company produce a greater amount of Molybdenum-99 (Mo-99) to supply millions of medical procedures annually with enough technetium-99m (Tc-99m), reports the Wisconsin State Journal.

The 125-Kilowatt machines create a beam of electrons that can be focused on a quarter-sized disc of Mo-100 refined from molybdenum. The electrons move close to the speed of light, allowing them to dispose of a neutron from the target material. The material is dissolved into a sterile liquid that can be injected into patients.

NorthStar aims to utilize the machinery as part of its new method for producing Mo-99, a radioisotope used in many SPECT imaging exams. It currently applies this process at its research reactor in Columbia, Missouri, where it produces the isotope by adding a neutron to molybdenum-98. Access to the radiopharmaceutical has been limited by a severe shortage over the past decade due to reliance on foreign imports from aging reactors.

The FDA recently approved NorthStar’s application for this method, with the company expecting it to increase production capacity up to four times above that of NorthStar’s current technology. It can then provide customers with higher activity source vessels, which will support enhanced radiopharmacy efficiencies. The approval came through a prior approval supplement (PAS) to NorthStar’s original RadioGenix System (technetium Tc 99m generator) New Drug Application. It is applying the method without using highly enriched uranium.

The accelerators are the latest addition to the $80 million facility, which was completed in 2019 just off Interstate 39/90. The aim is to create a sustainable, domestic Mo-99 supply in the U.S. through dual production and processing hubs for additional capacity and scheduling flexibility. NorthStar plans to create at least two more buildings at this location. The Beloit factory is expected to make it a major supplier of Mo-99 and potentially other isotopes that can be made with the same technology.

The company hopes to receive final FDA approval for its method by the end of 2022 and begin commercial production of Mo-99 in early 2023.