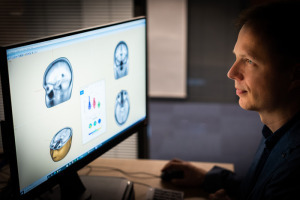 Using an EEG cap, researchers may be able to identify early signs of Alzheimer's from brain waves
Researchers in the U.K. have applied EEG to the early diagnosis of Alzheimer’s disease.

Using an EEG cap, psychologists at the University of Bath passively measured brain activity and recorded small, subtle changes in brain waves in participants who were tasked with watching flashing images on a screen for two minutes.

Dubbing their approach "Fastball EEG," they say that in the future it could potentially allow for diagnosis up to five years earlier. "It is objective and passive. We bypass the biases that can be introduced by culture, linguistic ability, intelligence and executive function. All of these factors can affect performance on a typical pen and paper neuropsychological test," lead researcher and cognitive neuroscientist Dr. George Stothart told HCB News.

The approach is cheap, portable and can be completed with preexisting technology in hospitals, says Stothart. The tests can be used with any EEG system and all hospitals would require is the stimulation sequence, which can be shown to patients via a tablet or mobile phone. These, he said, would need to be developed; and for now, the test is just shown on a standard laptop. He adds that participants do not even need to understand or respond to the task they are performing and may not be aware of the memory response.

Research was funded by dementia charity, BRACE. The test may allow clinicians to gain more insight into the disease state earlier so they can prescribe drugs like Aducanumab, the first disease-modifying treatment for Alzheimer’s disease, and lifestyle interventions sooner, say the researchers.

Alzheimer’s disease is primarily diagnosed late, when it has already progressed. It is the underlying cause of approximately 60% of dementia cases, with the population for Europe and North America having an estimated prevalence rate of 5-7% and costs expected to rise as aging populations continue to increase.

Stothart and his colleagues hope to lower the age of diagnosis by up to five years in the near future, and envision their approach eventually taking the form of a tool similar to a dementia screening solution used in middle age for everyone, regardless of symptoms. It would be used in the same way that high blood pressure is tested, though he says the research is a long way from achieving this.

The researchers have begun working on a £100,000 longitudinal study (more than $135,000) funded by the Academy of Medical Sciences. They will use the Fastball technology to assess patients with mild cognitive impairment, which is the first sign of Alzheimer’s in some patients but goes undetected in many.

"We will test these patients twice over two years, then follow them up annually to see what form of dementia they subsequently developed," said Stothart. "The aim is to see if Fastball can predict conversion from MCI to Alzheimer’s."

Researchers in Lithuania also recently developed an approach using deep learning and functional MR that they say is 99% accurate in predicting the potential onset of Alzheimer’s disease early. Their approach has been shown in testing to distinguish between early MCI, late MCI and Alzheimer’s disease.

The findings were published in BRAIN.