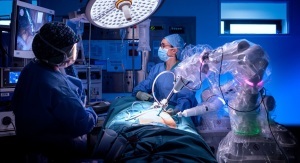 Designed for a wide range of minimally invasive surgeries, Versius is a modular and portable system that is expected to help cut surgical times, while improving patient outcomes. The new site will be in Ely, close to the company’s headquarters in Cambridge, and will include 7,044.8 square meters (75,832 feet) of floor space that will help to upscale manufacturing processes.

“The workforce in Cambridgeshire will be crucial in helping us deliver systems to benefit patients in all corners of the world and we see this as an important development in our company growth strategy,” Per Vegard Nerseth, chief executive officer of CMR Surgical, said in a statement.

Versius is used for minimal access procedures, also known as keyhole or laparoscopic surgery. It was initially used to perform colorectal surgeries to treat serious bowel disease or bowel cancer. Its design consists of three independent arms modeled in the same size and shape as those of humans, and each is coupled with 3D visualization and unique instrument controls that allow surgeons to mimic their own human movement for precise and less strenuous surgeries.

Up to 200 skilled employees will work in the facility in production, quality, manufacturing engineering, supply, operations and logistics. The investment is expected to help CMR contribute to the improvement of surgical care via surgical robotics.

“Connecting, in proximity, our skilled workforce from manufacturing, R&D, supply and other important functions means that we can bring together the strongest talent to deliver the commercial production upscale for Versius,” said Barrington D’Arcy, chief operations officer of CMR Surgical.

The company recently completed the largest-ever MedTech private financing round worldwide in June, in which it raised $600 million (£425 million). It is focused on scaling the reach of Versius, having recently launched it in Australia and in Germany, this year. The NHS also began using its first Versius Robotics Surgery System for the first time in 2020 at a hospital in Scotland.

The company currently has installed its solution in India, the U.K., Europe, Australia and the Middle East.