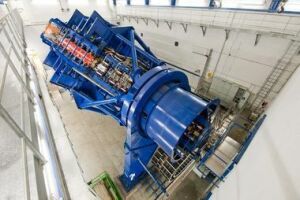 The particle therapy facility performed the procedure back in July and also applied it for the first time ever using pencil-beam scanning. It plans to start using its gantry beamline and initiate a large-scale clinical trial that will consist of 20-50 patients.

"Everything went smoothly for the first and following fractions,” Jürgen Debus, professor and medical director in the department of radiology at HIT, said in a statement.

Helium ion therapy is still an experimental form of treatment that delivers radiation via helium ion-charged particles. It is expected to be more effective in destroying tumors, compared to photon radiotherapy and proton therapy. In addition to precisely targeting tumors, the treatment can be completed in a few sessions that last between a few minutes to a maximum of 60 minutes, according to HIT, which is the first in Europe to offer helium.

HIT performed the treatment with RayStation, version 9B, which supports the use of helium ions side by side with carbon ions and protons. RayStation replaced the facility’s existing treatment planning systems in 2018 and has been used there for proton and carbon ion therapy treatments. The software provides the same functionality to helium ions as it does for proton and carbon pencil-beam scanning, including robust optimization and evaluation, and manages treatment planning for a variety of modalities from a single platform.

RayStation calculates physical dose using a pencil beam dose algorithm on the graphic processing unit, and determines the relative biological effective dose with either the local effect model or microdosimetric kinetics model. Once plans are set up, it exports them to HIT’s Siemens Fraction Sequences Planner.

The study of helium ions as a cancer treatment began between 1975 and 1993 at Lawrence Berkeley Laboratory in the U.S. with the use of broad beams. HIT is currently studying its use for treating brain tumors, chordoma, ENT tumors, prostatic, pancreatic, liver, recurrent rectal, lung cancer and lymphomas, according to its website.

RaySearch has also installed its treatment planning technology for heavy ion therapies at Shanghai Proton and Heavy Ion Center (SPHIC) in China. The aim is to help secure Chinese market clearance for proton and heavy ion treatment planning. In addition, as of May 2019, it has helped set up four carbon ion centers for clinical use. One is the Yamagata University Hospital in Northern Japan, which treated its first patient with the RayStation treatment planning system back in April. Another is La Clinique Générale-Beaulieu, which used RayStation and RayCare to treat its first patient just this month.