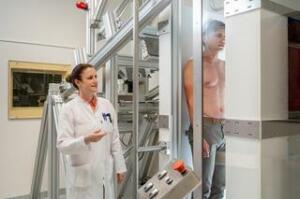 Dark-field X-ray imaging may help diagnoses pulmonary ailments early, with less radiation exposure than CT
German researchers at the Technical University of Munich are evaluating a new X-ray method that could aid diagnosis of pulmonary ailments and allows for treatment follow-up early.

Known as dark-field X-ray, the approach requires only 1/50th of the radiation dose typically used in CT scanning and is capable of showing early changes in the alveolar structure caused by chronic obstructive pulmonary disease (COPD).

"The X-ray dark-field signal is particularly strong for interfaces between air and tissue," said lead researcher Franz Pfeiffer, professor for biomedical physics and director of the Munich Institute of Biomedical Engineering at TUM, in a statement. "This makes it possible for a dark-field X-ray image of the lung to clearly distinguish between intact alveoli (those filled with air) and regions in which less intact alveoli exist."

Whereas conventional X-ray imaging is based on the attenuation of rays as they pass through the tissue, dark-field technology produces scans based on the wave nature of X-ray light by using the physical phenomenon of scattering to visualize structures that are mostly transparent. As in the similar field of dark-field microscopy, the structures appear as bright images against a dark background.

Dark-field imaging can be used for a range of pulmonary pathologies, such as pulmonary fibrosis, pneumothorax, lung cancer and pneumonia, including COVID-19. Pfeiffer hopes these findings will allow for further study and eventually the development of technology for the clinical setting. "Dark-field chest X-rays are currently giving us a chance to significantly improve the early detection of lung diseases and at the same time to implement it on a wider basis than before.”

The findings were published in Lancet Digital Health.