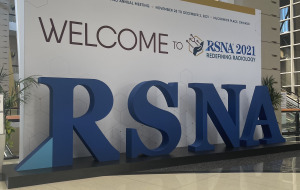 This week I am taking Five Minutes in Healthcare on the road with me, as I join the radiology community at the annual RSNA meeting at McCormick Place in Chicago.

Obviously, this is a year unlike any other. For that reason, I wanted to capture the occasion on video. This also allows me to share some of the sights and sounds of the show with people who were unable to attend in person.

Here is my video recapping Monday, 11/29, (not Tuesday, which I mistakenly say in the introduction). It was good to see more people at the show today than we had yesterday. You will see that I spoke to Josh Block from Block Imaging, John Vano from Radiology Oncology Systems, Inc., and Mehdi Small from LBN Medical.

There were other interviews I conducted, but unfortunately the audio from those conversations did not come across in the recording so I could not include them in the recap.