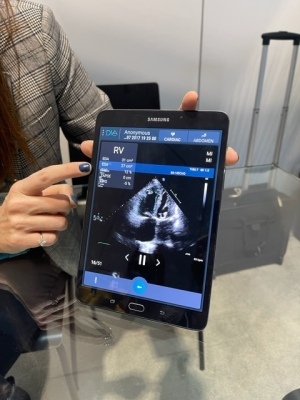 The size and functioning of the heart’s right ventricle can indicate signs of cardiac dysfunction, including pulmonary embolism, pulmonary hypertension and right heart failure. MR is considered the gold standard for cardiac imaging, and while common, RVF analysis via ultrasound is often difficult due to the RV’s location and frequently requires additional examinations to ensure results are accurate.

DiA’s software measures the size, function and strain of the right ventricle and requires just one click, with results delivered in a few seconds in one single view. “When you do a regular echo or cardiac exam, you have to take a few views to get those results. We’re doing everything from one view and automatically. With others, you have to draw lines manually and go to different views,” DiA CEO and co-founder Hila Goldman Aslan told HCB News.

Compared to cardiac MR, DiA’s solution showed high sensitivity and specificity for abnormal RVEF, including FAC 87% and 60%; FWS 80% and 61%; TAPSE 77% and 54%; any 2 criteria 83% and 61%; and all 3 criteria 63% and 69%. The authors of the study say that the application holds the potential to accurately and instantly detect evidence of right heart dysfunction at the bedside. “As echo is the first imaging triage modality used for scanning suspected heart issues, this study validated the potential of adding AI as part of our cardiac ultrasound workflow,” said Dr. Martin Goldman, a cardiovascular disease specialist at Mount Sinai and one of the authors of the study, in a statement.

Goldman Aslan says that DiA’s software is not only helpful for assessing right ventricle function in severe cardiac patients, but also those with COVID. This is because the disease first attacks the lungs, followed by the left ventricle of the heart and then the right. “If you see an issue with the right ventricle, it may be because of COVID. You need to monitor the heart when you are treating COVID patients. Since it doesn’t have radiation, you can use ultrasound every hour and see if the treatment you are providing is working. With our tool, you can see the difference from hour to hour and if there were any improvements or not.”

Prior to RSNA, the results were presented in November to the American Heart Association. The findings were published in Circulation Magazine, Volume 144, Issue 1.