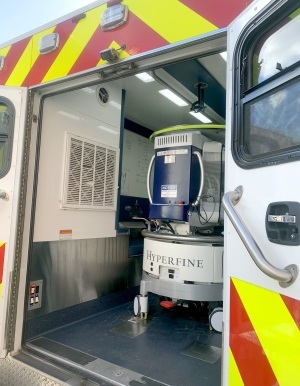 Neuroradiologists at the Medical University of South Carolina say that a TeleEMS program with MR scanning is possible and can help medical technicians consult with stroke specialists and jumpstart care while on the way to hospital and help physicians prepare for arrivals in advance.

Orchestrating a test run, the group drove an ambulance throughout Charleston with an MR scanner used in the back while the vehicle was in motion. Unlike CT, MR can detect smaller blockages and help doctors determine if a patient should receive the clot-busting drug, tPA or a thrombectomy. Such information may help patients with large clots bypass the current protocol of going to a tPA-capable center and instead, be directly admitted for a thrombectomy. Delaying such a procedure can eventually make patients ineligible for it due to the amount of damage they incur.

“Stroke is our primary objective because the benefits of treatments for acute stroke on patient outcomes are well established; however, these benefits are time-dependent and decrease as time to restore blood flow to the brain increases,” Dr. Donna Roberts, a professor in the department of radiology and radiological science in the College of Medicine at MUSC, told HCB News.

The idea was inspired by Roberts' research on scanning in space and other extreme conditions. The ambulance was equipped with a portable MR scanner developed by Hyperfine. The machine weighs 1,400 pounds and is smaller than the average MR scanner. It also has wheels and is primarily used to conduct brain scans at the bedside of patients in hospitals.

Roberts says that one impressive feature was the ability of the machine to correct its diagnostic imagery while the ambulance was in motion, through its automatic motion correction technology.

Every 15-minute reduction in stroke care significantly reduces risks for disabilities and mortality, according to the researchers. Some mobile stroke units have been developed to include CT scanners in ambulances, along with a critical care nurse, CT technician and paramedic. Such units are expensive, however, ranging from $600,000 to $1 million per unit. A portable MR system would be a fraction of the cost, would not expose patients to radiation, and offer the advantages of MR imaging.
1(current)
2