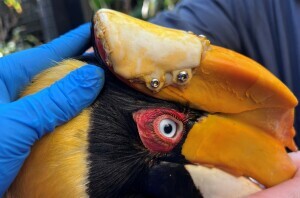 Radiologists helped craft a 3D-printed casque for a hornbill who had hers removed due to the presence of a tumor. (Photo courtesy of ZooTampa)
Radiologists specializing in human CT imaging at the University of South Florida have saved the life of a great hornbill with a tumor on its casque, a helmet-like structure on the upper mandible, by designing a 3D-printed prosthetic to replace it.

Veterinarians at ZooTampa consulted the doctors after noticing a lesion on the upper beak of the 25-year-old bird, named Crescent. The tumor was at the base of her casque, and her caregivers suspected it might be squamous cell carcinoma, which is deadly to her species.

CT scans confirmed their fears, and the doctors said the tumor would need to be surgically removed. But because it was located near the back of the casque and close to the skull, the procedure would expose her sinuses, meaning that Crescent was going to need a 3D replica to replace the casque, reported KTLA/Channel 5 Morning News.

The doctors, who often help the zoo after hours, immediately set to work designing one that would fit her perfectly. “We asked ourselves, if this was a human, what would we do? So we began to plan how to fix Crescent’s casque using the technology we use every day on our human patients — 3D printing,” said Dr. Summer Decker, associate professor, vice chair for Research and Innovation and director of the 3D Clinical Applications Division for the Department of Radiology in the USF Health Morsani College of Medicine and Tampa General Hospital, in a statement.

Decker and her colleagues designed the casque and a surgical guide with a 3D printer from Formlabs. The manufacturer donated a material that would make the replacement lightweight, yet durable.

The team reviewed the procedure on a 3D-printed replica of Crescent’s head before proceeding with the surgery. Once the tumor was removed, surgeons attached the 3D-printed casque with dental acrylic and then permanently attached it with titanium screws. Following her procedure, Crescent had full use of her beak, and her prognosis is good, according to the doctors.

A native of the Indian subcontinent and Southeast Asia, hornbills have been designated a “vulnerable” species by the International Union for Conservation of Nature. The 3D-printed prosthetic is the first of its kind on a hornbill in the U.S. and the second in the world.

“It’s our responsibility, and our privilege, to care for all of our residents,” Baker said. “And this bird needed us to pull out all of the stops.”

ZooTampa is monitoring Crescent daily as her casque regrows to ensure the tumor does not return. They report that she is doing well, and that there have been no changes in her behavior since the surgery.