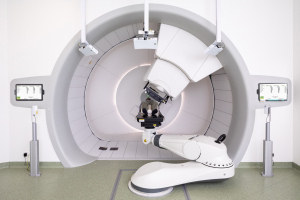 IBA will collaborate with Dutch university UMCG on development of a new FLASH radiotherapy protocol. (Photo courtesy of IBA)
Ion Beam Applications and the University Medical Center Groningen (UMCG) in The Netherlands have embarked on a four-year research partnership to develop a new FLASH irradiation protocol for early-stage breast cancer.

An advanced form of radiotherapy, FLASH therapy delivers ultra-high doses of radiation at roughly 40 Gy/s and above in less than one second. A full course can be as short as one millisecond. This not only reduces the number of treatment sessions a patient must undergo but also the damage and toxicity to surrounding healthy tissue, while delivering radiation directly to the tumor.

IBA and UMCG will build advanced FLASH irradiation techniques and preclinical radiobiology models that validate and speed up commercial adoption of IBA’s ConformalFLASH technology for use in preoperative early breast cancer treatment. The technology combines ultra-high dose rate FLASH radiotherapy with the Bragg Peak properties of protons, which plots the energy loss of ionizing radiation as it travels through matter and occurs immediately before the protons come to rest. Once this point is reached, rapid doses can be delivered to the tumor, while sparing healthy tissues.

The approach allows for extreme hypofractionated radiotherapy, which consists of five fractions, to become the standard of care for select patients with early-stage breast cancer. It provides minimal radiation exposure to surrounding tissues like the heart and lungs. “FLASH proton therapy gives a unique opportunity to explore personalized breast cancer radiotherapy and holds the potential to further reduce treatment burden and cost by offering a single fraction ablative treatment for early-stage breast cancer patients,” said Dr. John Maduro, radiation oncologist at UMC Groningen, in a statement.

Dose would be based on a single fraction radiotherapy protocol (1x20Gy), which has resulted in similar local control and toxicity rates compared to conventional fractionation. The aim of the study will be to evaluate late toxicities for these regimens, which have not been thoroughly studied.

Increasing the fraction dose and applying radiation at FLASH dose rates is expected to lead to maximal ablative radiotherapy delivery, which is often limited by the adverse risks that radiation poses to normal surrounding tissue. As a result, the standard of care in breast cancer treatment often calls for postoperative radiotherapy over multiple doses.
1(current)
2