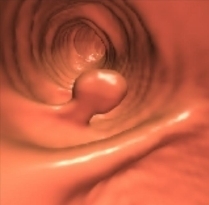 When applying the technology, they found that overall detection rose by 27% in average-risk patients, and that the adenoma per colonoscopy rate went up 22%, from 0.82 to 1.05. They say the approach may also help identify cancerous and precancerous polyps, as well as prevent missed polyps from being left behind in the colon and progressing to precancerous stages in the first place.

“Several software technologies are currently available for clinicians and incorporating the use of these resources will only enhance the care we provide our patients and improve the quality of exams we, as physicians, are able to perform," Dr. Aasma Shaukat, the Robert M. and Mary H. Glickman professor of medicine and gastroenterology, said in a statement.

While effective, the success of a colonoscopy depends on the skills of the physician. An estimated 30% of polyps are missed during a traditional procedure, says Shaukat. In their study, she and her colleagues used a CAD AI solution to identify colorectal polyps during high-definition white-light colonoscopy exams in real time of 1,440 patients. All had not had a previous colonoscopy in the last three years, and of them, 677 were randomly selected to receive a traditional exam, while 682 received one with AI.

In addition to greater detection, the researchers found no decrease in the true histology rate, indicating that all polyps of concern were removed. They say that long-term follow-ups are necessary to better understand the clinical benefits of computer-assisted devices. “Colorectal cancer is the second leading cause of cancer-related deaths in the United States, and it is one of the few cancers that can be prevented if caught early,” said Shaukat.

The findings were published in Gastroenterology.