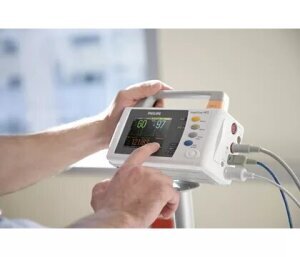 Philips will pay $4.2 million to settle False Claims allegations about its IntelliVue MP2 Mobile Patient Monitor. (Photo courtesy of Philips)
Philips North America will pay approximately $4.2 million to resolve False Claims allegations that it sold a patient monitor device to U.S. military facilities without notifying them of modifications that may or may not have required recertification.

From January 2012 to November 2018, the company distributed its IntelliVue MP2 Mobile Patient Monitor system to the U.S. Air Force, U.S. Army, U.S. Navy and the Defense Logistics Agency. All four agencies require devices to undergo airworthiness and safe-to-fly testing and certification to ensure they do not adversely affect the operations of certain aircraft systems and vice versa.

Philips received initial airworthiness and safe-to-fly certifications for the MP2s from the Army in 2018 and the Air Force in 2011, but admits that it failed to notify these and other military testing facilities of modifications it made afterward.

“As part of the settlement, Philips has agreed to pay a total amount of approximately $4.2 million. Philips had already recorded a provision in connection with this settlement,” company spokesperson Steve Klink wrote to HCB News in an email.

Notifying users of modifications is essential for determining whether the changes require retesting for certification. By not notifying military personnel, the U.S. contends that Philips submitted or caused the submission of false claims to the U.S. military.

Since the specified time period, sales of the device have been discontinued.

While related to its Connected Care Portfolio, the settlement is in no way connected to the June 2021 Philips Respironics recall, says Klink.

It announced another in August 2022 of 1,700 respiratory devices globally due to possible contamination of a plastic component with a noncompatible material. The presence of the plastic in the device motor of the bi-level positive airway pressure machines may cause it to leak certain chemicals, including volatile organic compounds.

While no harm has been reported, Philips initiated the recall to avoid future occurrences, according to Reuters.

The latest in patient monitoring technology