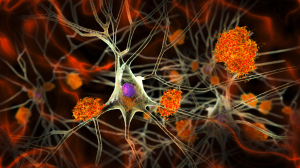 That’s what researchers in the Memory Disorders Clinic at the VA Boston Healthcare System found in two studies on the scans, which are minimally invasive diagnostic procedures for measuring amyloid, a naturally occurring protein in and common biomarker of the disease.

The clinic is one of the few VA programs where this type of imaging is conducted, with others and private sector facilities not typically performing it because of insurers and Medicare not reimbursing for it, despite being FDA-approved.

“Our study is unique because it’s the first use of amyloid PET scans in clinical practice that showed clinical management impacts in a real-world setting,” said Dr. Katherine Turk, a neurologist at the VA Boston Healthcare System and a co-author of the research, in a statement.

Turk led the first study, which assessed the scan’s ability to diagnose Alzheimer’s. She and her team assessed 565 patients, collecting memory loss history and performing a complete neurological exam, cognitive testing, an MR scan, and blood work to exclude other conditions. Amyloid scans were only ordered if they felt the exams were warranted.

Of the 565, 197 veterans (more than a third) received an amyloid PET scan over three years, with 98% meeting criteria to justify one. The average age of these patients was 69, as amyloid buildup around this age is considered abnormal.

In a follow-up study evaluating clinical impact, 37 of the 197 tested positive for Alzheimer’s, which was lower than other amyloid PET studies, in which positive results sometimes reach as high as 50%.

Turk says this shows just how more clinically challenging diagnosing and caring for veterans is, because of the other possible conditions they may have. Testing negative led to longer follow-ups, whereas a positive diagnosis led to less follow-ups and more drug prescriptions and research referrals. “When a scan is positive, we usually have our answer,” said Turk.

The researchers are using national VA data to better understand how often amyloid PET scans are ordered and to see if their work will add to guidelines and increase usage in other VA clinics, and potentially private facilities if insurance policies change.

The findings were published in the August 2022 issue of Alzheimer’s & Dementia: Translational Research & Clinical Interventions.