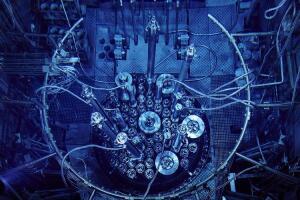 BR2 reactor (Photo courtesy of SCK CEN)
Shortages of molybdenum-99 and technetium-99m are expected through the end of November following the discovery of a mechanical failure at the BR2 reactor in Belgium.

The issue was discovered during inspections, with the Nuclear Medicine Europe (NMEU) Emergency Response Team informed about it at a meeting on October 28. An investigation into resolving the matter continues, and has resulted in the restart date for the reactor being pushed back to November 18 at the earliest.

Additionally, the NMEU announced a planned outage back in August of one of the reactors used to produce I-131, saying that it could periodically disrupt supplies from September 2022 through February 2023.

The delayed restart of the BR2 reactor could exacerbate the isotope shortage, it warned in a statement. “Both Mo-99 and I-131 shortages are expected through and beyond the third week of November.”

In service since 1962, the two main radioisotopes produced by the research reactor are Mo-99 and lutetium-177, according to SCK CEN, the nuclear research center where the BR2 reactor is located.

Tc-99m is utilized in approximately 50,000 medical procedures per day in the U.S. alone, and cannot be replaced by less costly or more readily available treatment options, according to a Society of Nuclear Medicine and Molecular Imaging estimate.

Only five nuclear reactors in the world are capable of producing Mo-99, making any delays to production a hindrance to care and access, reports SNMMI. "SNMMI is closely monitoring the current Mo-99 production issues, and we are in communication with the Mo-99/Tc-99m generator producers to ensure that any supply disruptions are minimized to every extent possible," former SNMMI president Alan Packard, Ph.D., FSNMMI, told HCB News.

To offset the impact of the mechanical failure, NTP Radioisotopes, a subsidiary of the South African Nuclear Energy Corporation, is extending the cycle of its SAFARI reactor, which supplies one-third of the global supply of Mo-99, by one week.

Mitigating actions at other reactors are also being considered.

Demand for nuclear medicine is expected to increase, despite the pandemic and supply chain challenges, according to IMV Medical Information Division’s 2022 Nuclear Medicine Market Outlook Report, published in July. It attributed this primarily to an increase in available nuclear medicine cameras among different types of providers.

Demand is also expected to increase in Jamaica, which recently opened its first nuclear medicine center in 20 years to provide cancer patients with a wider range of diagnostic and therapeutic care.

The NMEU will provide an update on the BR2 reactor during an Emergency Response Team meeting on November 4.