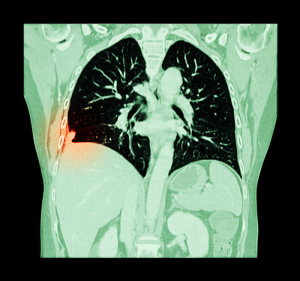 California was the lowest at 1%, while Massachusetts ranked the highest at 16.3%, according to the American Lung Association's 2022 State of Lung Cancer report.

Currently 14.2 million Americans are eligible for screening under the US Preventive Services Task Force guidelines, which extend to those between 50 and 80, with a 20 pack-year history and who are either current smokers or quit in the last 15 years. Annual low-dose CT reduces the lung cancer death rate by up to 20%, according to the American Lung Association.

While the national average five-year survival rate has grown to 25% in the last few years, screening is far below that of colorectal, breast and cervical cancer, reports USA Today.

“Increased lung cancer survival is attributable to advancements in research, better treatments and other factors, however, lung cancer screening is the most immediate opportunity we have to save lives,” said Harold Wimmer, national president and CEO for the American Lung Association, in a statement.

Early diagnoses can often be treated with surgery, because the cancer has not spread, but only 20.8% of cases underwent such procedures in 2022 nationwide.

And 20.6% did not receive any form of treatment, due to a lack of provider or patient knowledge; stigmas associated with lung cancer; fatalism following diagnosis; and cost of treatment. People of color were more likely to receive no treatment, have lower survival rates, and less chances of being diagnosed early or receive surgical treatment.

Additionally, fee-for-service state Medicaid programs are not required to cover screenings for high-risk populations. While programs in 46 states do, three do not. One state did not have information available to show if its program does cover screenings.