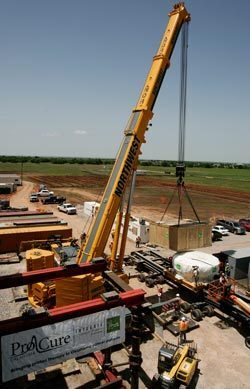 William C. Goad, M.D., a radiation oncologist with Radiation Medicine Associates, said the cyclotron's arrival brings him one step closer to treating patients with proton therapy. Proton therapy is an alternative to radiation therapy without many of the short and long-term side effects that are often experienced by patients. Proton therapy's ability to precisely target tumors is ideal for treating tumors near vital organs and is particularly beneficial for pediatric cancer patients who are more susceptible to the side effects of radiation treatment.

The arrival of the cyclotron is a key milestone in the development of a proton therapy center as it is prepared to treat patients.

The cyclotron, weighing as much as a Boeing 747 jet, was manufactured in Belgium by IBA, a world-leader in cancer technology. The cyclotron traveled four weeks and about 5,700 miles by sea, arriving first in Houston. A trailer made for extraordinarily large cargo traveled at a top speed of 45 mph during a nearly 500-mile journey to the Oklahoma City center, located at the northwest corner of Memorial and MacArthur. Half of the cyclotron arrived on Saturday. The trailer will return to Houston to bring the second half of the cyclotron to Oklahoma City.

"The cyclotron is impressive not only in its size but also for its technologically advanced cancer-fighting power," said Ed Bertels, executive director of the Oklahoma ProCure Treatment Center. "We are excited to bring this cutting-edge technology here to fight cancer at the nation's first community-based proton center."

The cyclotron is responsible for splitting the atom and accelerating protons to nearly the speed of light to create a beam of energy that can deliver a ore-effective dose to the patient's tumor.

The 55,000-square-foot, four-treatment-room center broke ground last April. The center is being developed in partnership with Radiation Medicine Associates, an Oklahoma City-based private practice physician group. About 1,500 patients a year will be treated at the Oklahoma ProCure Treatment Center. Cancer is the second leading cause of death in Oklahoma with nearly 18,000 new cases diagnosed each year, according to the state Health Department. One out of three Oklahomans are affected by cancer during their lifetime.
1(current)
2
3