Snapshots of Eyes Could Serve as Early Warning of Diabetes 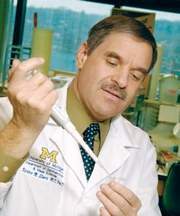 Victor M. Elner, M.D., Ph.D.
A new vision screening device, already shown to give an early warning of eye disease, could give doctors and patients a head start on treating diabetes and its vision complications, a new study shows.

The instrument, invented by two scientists at the University of Michigan Kellogg Eye Center, captures images of the eye to detect metabolic stress and tissue damage that occur before the first symptoms of disease are evident.

For people with diabetes - diagnosed or not - the new device could offer potentially significant advantages over blood glucose testing, the "gold standard" for diabetes detection.

The device takes a specialized photograph of the eye and is non-invasive, taking about five minutes to test both eyes.

In the July issue of Archives of Ophthalmology, Victor M. Elner, M.D., Ph.D., and Howard R. Petty, Ph.D., report on the potential of the new instrument to screen for diabetes and determine its severity. If further testing confirms the results to date, the new instrument may be useful for screening people who are at risk of diabetes but haven't been diagnosed.

"Our objective in performing this study was to determine whether we could detect abnormal metabolism in the retina of patients who might otherwise remain undiagnosed based on clinical examination alone," says Elner, professor, Department of Ophthalmology and Visual Sciences at U-M Medical School.

Metabolic stress, and therefore disease, can be detected by measuring the intensity of cellular fluorescence in retinal tissue. In a previous study, Petty and Elner reported that high levels of flavoprotein autofluorescence (FA) act as a reliable indicator of eye disease.

In their new study, Elner and Petty measured the FA levels of 21 individuals who had diabetes and compared the results to age-matched healthy controls. The Kellogg scientists found that FA activity was significantly higher for those with diabetes, regardless of severity, compared to those who did not have the disease. The results were not affected by disease severity or duration and were elevated for diabetics in each age group: 30 to 39 years, 40 to 49 years, and 50 to 59 years.

Given the increasing prevalence of diabetes, the FA device holds the potential to help address a leading and growing public health concern.

Some 24 million Americans have diabetes and an additional 57 million individuals have abnormal blood sugar levels that qualify as pre-diabetes, according to the latest report from the Centers for Disease Control and Prevention. In addition, 4.1 million people over the age of 40 suffer from diabetic retinopathy, an eye-related complication of diabetes that is the leading cause of blindness among working-age adults.
1(current)
2