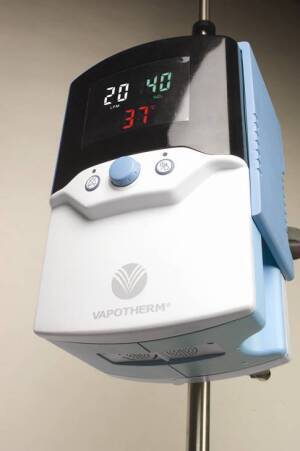 It is the first high flow humidification system to integrate gas blending, flow control and humidification technology into one device for the conditioning of nasal cannula inspired gases, says Kevin Thibodeau, Vapotherm's executive vice president of sales and marketing. The product is selling in the US for $5,400 and has already been introduced in Europe.

"It's really good for any kind of chronic respiratory ailment," Thilbodeau says, "But we expect it to be hugely successful in neonatal units because there is such a demand for a less invasive approach there."

He says because Precision Flow uses a nasal cannula, older patients can receive oxygen while talking and eating. "Cannulas were out there but high flows were not possible until our technology came about," he notes.

He says now that Vapotherm has won FDA approval for the device; the company plans to roll out the product through 13 specialized respiratory distributors into adult ICUs, burn care and cardiac care units, as well as neonatal units.

The company is currently marketing a non-invasive product called the Vapotherm 200i, which has "taken off" in neonatal units because it is noninvasive, Thibodeau says.

"The Precision Flow brings a series of new functions and safety features," he says.It can also be used by home users with chronic respiratory conditions. "We've just launched the product but orders are coming in very quickly," Thibodeau says, adding that there aren't any direct competitors using this kind of technology yet.