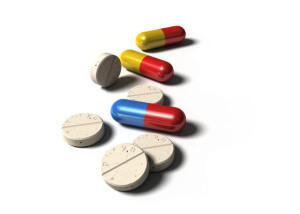 New study questions
the side-effects of
painkillers and prostate
cancer biomarker
Eurkea Alert--Common painkillers like aspirin and ibuprofen appear to lower a man's PSA level, the blood biomarker widely used by physicians to help gauge whether a man is at risk of prostate cancer.

But the authors of the study, which appeared online Sept. 8 in the journal Cancer, caution that men shouldn't take the painkillers in an effort to prevent prostate cancer just yet.

"We showed that men who regularly took certain medications like aspirin and other non-steroidal anti-inflammatory drugs, or NSAIDS, had a lower serum PSA level," said first author Eric A. Singer, M.D., M.A., a urology resident at the University of Rochester Medical Center. "But there's not enough data to say that men who took the medications were less likely to get prostate cancer. This was a limited study, and we do not know how many of those men actually got prostate cancer."

Singer's team studied the records of 1319 men over the age of 40 who took part in the 2001-2002 National Health and Nutrition Examination Survey (NHANES), a health census conducted by the Centers for Disease Control and Prevention. The team looked at the men's use of NSAIDs such as aspirin and ibuprofen, as well as the painkiller acetaminophen, and at their PSA levels. A man's level of PSA, or prostate-specific antigen, is one of many clues that physicians watch to gauge a man's risk of getting prostate cancer.

The team found that men who used NSAIDs regularly had PSA levels about 10 percent lower compared to men who did not. The team made a similar observation with acetaminophen, but the result was not statistically significant due to the lower number of men in the study taking the medication.

While it might be easy to assume that a lowered PSA level automatically translates to a lowered risk of prostate cancer, the authors stress that it's too soon to draw that conclusion.

"While our results are consistent with other research that indicates that certain painkillers may reduce a man's risk of getting prostate cancer, the new findings are preliminary and don't prove a link," said corresponding author Edwin van Wijngaarden, Ph.D., assistant professor in the Department of Community and Preventive Medicine.

Singer said that a man's PSA level can be elevated for reasons unrelated to cancer. Sometimes, for instance, while inflammation is part of a cancer process, sometimes it is not, and so it's possible that a lowered PSA reflects reduced inflammation without affecting a man's risk of prostate cancer. Another possibility is that a PSA level lowered by NSAIDs might artificially mask a man's risk of getting prostate cancer: The medications might lower the PSA, but a man's risk might stay precisely the same.

"These findings underscore the importance for doctors to know what medications their patients are on," said Singer, who is chief Urology resident at the University of Rochester Medical Center. "For instance, there are medications commonly used to treat an enlarged prostate that can result in a decreased PSA, and most physicians know that. Doctors should also be asking about patients' use of NSAIDs such as aspirin and ibuprofen.

"The data is very interesting, but it will take more research to determine how to interpret the findings. In the meantime, this shouldn't change men's behavior or prompt them to take these medications to try to prevent prostate cancer."