Study Challenges Routine Use of MRI to Evaluate Breast Cancer 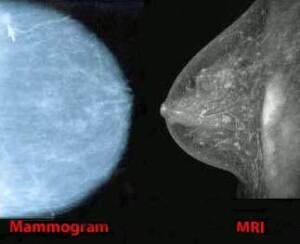 MRIs to Evaluate
Breast Cancer
A new study suggests women with newly-diagnosed breast cancer who receive an MRI after their diagnosis face delays in starting treatment and are more likely to receive a mastectomy.

The study, presented this week at the 2008 ASCO Breast Cancer Symposium, also shows that despite lack of evidence of their benefit, the routine use of MRI scans in women newly diagnosed increased significantly between 2004 and 2005, and again in 2006.

"We have yet to see any evidence that MRI improves outcomes when used routinely to evaluate breast cancer, and yet more and more women are getting these scans with almost no discernible pattern," said Richard J. Bleicher, M.D., F.A.C.S., a specialist in breast cancer surgery at Fox Chase Cancer Center. "For most women, an MRI scan prior to treatment is unnecessary. MRI can be of benefit because it's more sensitive, but with the high number of false positives and costs associated with the test, more studies are needed to determine whether MRI can improve outcomes in women with breast cancer."

Bleicher and his colleagues reviewed the records of 577 breast cancer patients seen in a multidisciplinary breast clinic where they were evaluated by a radiologist, pathologist, and a surgical, radiation, and medical oncologist. Of these patients, 130 had MRIs prior to treatment.

"Those who received an MRI had a three-week delay in the start of their treatment," said Bleicher. "In addition to the treatment delay, we're concerned that the well-documented false-positive rate with MRIs may be leading - or misleading - women into choosing mastectomies."

Bleicher said many of the women would have been candidates for a lesser procedure known as a lumpectomy. "There are a few reasons why we may be seeing higher mastectomy rates when MRIs are performed. An MRI scan is very sensitive, leading to a high number of false-positive findings. Rather than having a biopsy to see if those findings are real, women and their doctors may choose mastectomy out of an abundance of caution. Other studies have demonstrated that this often represents over-treatment because many of the mastectomies are later proven by pathology to have been unnecessary."

The study also revealed that younger women were more likely to have an MRI. "In our analysis, that trend didn't correspond with various breast cancer risk factors, such as a family history of breast or ovarian cancer, nor with the characteristics of their disease," explained Bleicher.

Another research conclusion included the failure of MRIs to help surgeons decrease positive margins during surgery, another hypothesized benefit of MRI.

"MRI is a valuable tool in some women, but without evidence that routine pre-treatment MRI improves a woman's outcome, its disadvantages suggest that it should not be a routine part of patient evaluation for treatment," said Bleicher. "Greater efforts to define MRI's limitations and use are needed."