Freezing Ovarian Tissue Benefits Women Who Have Had Cancer 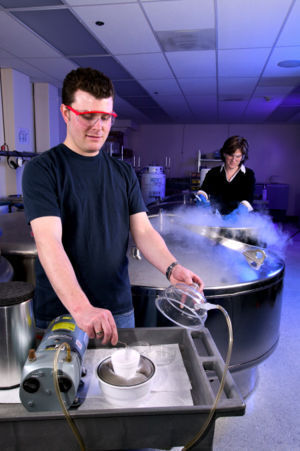 Cryopreservation in nitrogen
Emerging cryopreservation techniques are increasing hope of restoring fertility for women after diseases such as ovarian cancer that lead to destruction of reproductive tissue.

The same techniques can also be used to maintain stocks of farm animals, and protect against extinction of endangered animal species by maintaining banks of ovarian tissue or even nascent embryos that can used to produce offspring at some point in the future.

Until now these clearly related fields of research concerning preservation of animal and human ovarian tissue have been largely separate, but are now coming together to reinforce each other, following a highly successful workshop on cryopreservation of ovarian tissue, organized by the European Science Foundation (ESF). The human and animals cryopreservation fields have much to teach each other, and progress in both is likely to be accelerated as a result of growing collaboration, according to the ESF workshop's convenor Claus Yding Andersen.

Both parties can learn from each other," said Andersen. "Experiments which cannot be performed in women can be done in animal species," he noted, pointing out that much of the progress in humans has come as a result of animal experiments. But it is in humans where most successful transplantations of frozen ovarian tissue after thawing have been carried out, and where greatest experience in the field has been gained. Therefore the ESF conference considered how this could be applied to conservation of endangered species.

"The vast experience in women, with several children born as a result of transplantation of frozen/thawed ovarian tissue, can be applied in endangered species to know where to implant and how to obtain pregnancies," said Andersen. The techniques will also be valuable in agriculture, for preserving ovaries of farm animals in tissue banks with the potential for subsequent re-creation.

The conference highlighted recent progress in human ovarian cryopreservation, which has led so far to 25 women worldwide having ovarian tissue transplanted. Of these 25, five have given birth to babies following the successful transplantation of the frozen/thawed ovarian tissue, including two in Belgium, one in Israel, and two in Denmark. "We are likely to see a lot more of this coming in the coming years, including development of techniques for fertility preservation using different approaches," said Andersen. Most of these women had lost fertility following treatment for various forms of cancer. Currently more than a thousand women globally have had their tissue cryopreserved in an attempt to preserve fertility. This number is likely to increase in future as the transplantation technology becomes more mature and widely available.

The approach used most widely so far for cryopreservation involves slow freezing, which minimizes the damage caused by forming ice crystals to the follicles, the reproductive units containing the individual oocytes (eggs). However a new approach based on vitrification may achieve even better results, with both methods discussed at the ESF conference. Vitrification involves the conversion of ovarian tissue into a glass-like form without the damaging ice crystals, and can be achieved by very rapid freezing, for example by dowsing in liquid nitrogen. This supercools the water in the tissue, achieving a semi-solid form without formation of the crystals that destroy individual cells.