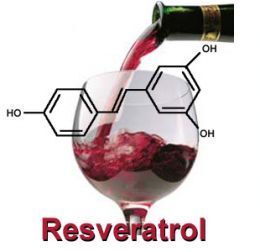 Resveratrol
Three studies examining men with prostate cancer offering insight into hormones, radiation and a protective ingredient in wine, were presented recently at the 50th annual meeting of the American Society for Therapeutic Radiology and Oncology (ASTRO) in Boston.

The first was a novel trial whose findings ran counter to medical practice and suggested that testosterone may be protective against high cholesterol, heart attack and diabetes. The study found that men over 70 with early-stage prostate cancer were 20 percent more likely to die if they were treated with anti-androgen therapy before receiving radiation seed implants, compared to men who were treated with seed implants alone.

"While multiple studies have shown that eliminating androgens from the body benefits high risk and intermediate risk patients, this may not be the case for older men with low-risk prostate cancer," Amy Dorsoretz MD, lead author of the study and radiation oncology resident at the Harvard Radiation Oncology Program told DOTmed News.

She said it looks as if depleting a man's testosterone can adversely affect cholesterol levels, may cause diabetes, and may also lead to cardiovascular disease. Dorsoretz said that other studies have already shown that patients who are deprived of androgens experience changes in body fat and may be at risk for diabetes.

"In men under 70, we didn't see this," she said, noting that her study looked at men with low-risk cancers, whose cancers have not yet spread. "In patients with more aggressive cancer, the benefits of eliminating androgens from the body outweigh the risk, because depriving the body of androgens slows the progression of cancer....However, in low risk patients [with early-stage cancers], we found that there is no proven benefit from androgen deprivation therapy. When treating a man over 70, doctors should think carefully about the risk and benefits of hormone-deprivation therapy to their patients," Dorsoretz said.