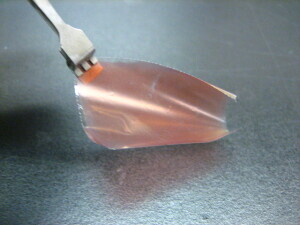 Nanodiamond-embedded devices
could be used to deliver
a broad range of therapeutics
EVANSTON, IL -- A Northwestern University research team has developed a promising nanomaterial-based biomedical device that could be used to deliver chemotherapy drugs locally to sites where cancerous tumors have been surgically removed. The flexible microfilm device, which resembles a piece of plastic wrap and can be customized easily into different shapes, has the potential to transform conventional treatment strategies and reduce patients' exposure to toxic drugs. The device takes advantage of nanodiamonds, an emergent technology for sustained drug release.

The researchers demonstrated that the device releases the chemotherapy agent Doxorubicin in a sustained and consistent manner, a requirement of any implanted device for localized chemotherapy. The results of the study were published online (Oct. 2) by the journal ACS Nano.

"The thin device -- a sort of blanket or patch -- could be used to treat a localized region where residual cancer cells might remain after a tumor is removed," said Dean Ho, assistant professor of biomedical engineering and mechanical engineering at Northwestern's McCormick School of Engineering and Applied Science, who led the research.

If a surgical oncologist, for example, was removing a tumor from the breast or brain, the device could be implanted in the affected area as part of the same surgery. This approach, which confines drug release to a specific location, could mitigate side effects and complications from other chemotherapy treatments.

"Several surgeons at Northwestern's Feinberg School of Medicine, as well as other medical schools and hospitals, are very interested in the device because it is biocompatible and provides such stable and consistent drug release," said Ho, a member of the Robert H. Lurie Comprehensive Cancer Center of Northwestern University.

In their study, Ho and his colleagues embedded millions of tiny drug-carrying nanodiamonds in the FDA-approved polymer parylene. Currently used as a coating for implants, the biostable parylene is a flexible and versatile material. A substantial amount of drug can be loaded onto clusters of nanodiamonds, which have a high surface area. The nanodiamonds then are put between extremely thin films of parylene, resulting in a device that is minimally invasive.

To test the device's drug release performance, the researchers used Doxorubicin, a chemotherapeutic used to treat many types of cancer. They found the drug slowly and consistently was released from the embedded nanodiamond clusters for one month, with more Doxorubicin in reserve, indicating a more prolonged release (several months and longer) was possible. The device also avoided the "burst" or massive initial release of the drug, a common disadvantage with conventional therapy.
1(current)
2