Neuroprotective Compounds Appear to Work - at Least in Mice 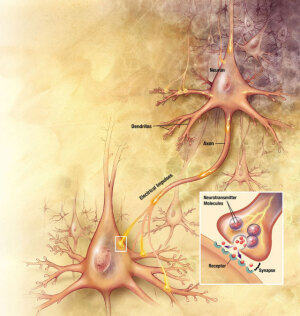 New research to unlock
the mystery of neurons
In animal trials, Dr. Santosh D'Mello of the University of Texas at Dallas has found an exciting new compound to halt the loss of neurons. He can't reveal how the compound works until he publishes a peer-reviewed paper on it in six to nine months.

Even as the Society for Experimental Biology and Medicine announced last week that Dr. D'Mello, professor of molecular and cell biology, had identified a class of compound called 3-substituted indolones that prevent neurogeneration in tissue and mouse cultures, Dr. M'Mello told DOTmed News that his lab has just identified an even more exciting class of compounds called benzoxazines, which appear to be very effective in protecting neurons.

He hopes to find a compound to halt the progression of Alzheimer's, Parkinson's and ALS. "We tested these on neurons in cultured tissue and they stop neurodegeneration and are non-toxic, even at high doses," Dr. D'Mello says. He adds, "We have started testing these compounds in mice and one of them is protective in mice that have Huntington's disease."

Dr. D'Mello says that in the lab, he tests compounds on strains of tissues and mice with Huntington's disease, rather than on the diseases he wants to treat. "Huntington's is a rare disease but simpler to get a handle on than Alzheimer's and Parkinson's disease, because it is purely genetic. The other diseases have a complex mixture of environmental and genetic influences that remain to be understood."

Dr. D'Mello says he can't provide details about the benzoxazines he has isolated until he publishes a paper on his findings. "We're sending the manuscript out for review. It will be six to nine months before it's published," he says.

What Dr. D'Mello can reveal is this: He thinks he has found a new and promising class of neuroprotective compounds. The university has filed a patent application for both the synthesis of these compounds as well as their use in the treatment of neurogenerative diseases. He adds that the university would like to license the compounds to a pharmaceutical or biotech company, which would finish animal testing and if successful, see the drug through clinical trials.

Dr. D'Mello is working with Dr. Ed Blehl, a chemistry professor at Southern Methodist University, who is helping to design the benzoxazine derivatives. The two universities are sharing the patents.

Human Beings: Not So Easy

Dr. D'Mello cautions that while he has been studying neurodegeneration in his lab for the last 15 years, he has seen a field littered with failed compounds that do amazing things in culture and animals, but don't work in people.
1(current)
2