A Card-Swipe for Medical Tests? 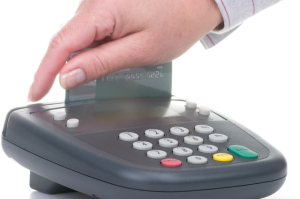 In the future clinical
lab tests may work
like card readers
University of Utah scientists successfully created a sensitive prototype device that could test for dozens or even hundreds of diseases simultaneously by acting like a credit card-swipe machine to scan a card loaded with microscopic blood, saliva or urine samples.

The prototype works on the same principle -- giant magnetoresistance or GMR -- that is used to read data on computer hard drives or listen to tunes on portable digital music players.

"Think how fast your PC reads data on a hard drive, and imagine using the same technology to monitor your health," says Marc Porter, a Utah Science, Technology and Research (USTAR) professor of chemistry, chemical engineering and bioengineering.

Porter is the senior author of a pair of studies demonstrating the new method for rapid disease testing. The research was published in the Nov. 1, 2008, issue of the journal Analytical Chemistry.

"You can envision this as a wellness check in which a patient sample -- blood, urine, saliva -- is spotted on a sample stick or card, scanned, and then the readout indicates your state of well-being," says USTAR research scientist Michael Granger, a co-author of the research. "We have a great sensor able to look for many disease markers."

Unlike lab tests today, results could be available in minutes, not hours to days or weeks.

Porter and Granger conducted the research with John Nordling, Rachel Millen and Heather Bullen at Iowa State University in Ames, where Porter once worked, and Mark Tondra, then at NVE Corp., in Eden Prairie, MN.

The Utah Science, Technology and Research initiative seeks to create new high-tech jobs by recruiting world-class research teams to develop products and services that can be commercialized to start new businesses and stimulate Utah's economy.

The prototype card-swipe device consists of a GMR "read head" and sample stick. Right now, the device is about the size of a PC. But Granger says that when it is developed commercially, the GMR sensor device will look like a credit card reader.

Porter expects a more advanced version will start being used to test farm animals for diseases in about two years, and a version for human medical tests might begin clinical evaluation in five years, perhaps sooner if pursued by certified laboratories.

"We also think it has homeland security applications," Porter says.

A card swipe device could be taken into the field, where a sample card or stick "could be dipped in groundwater, dried off and read in our device to look for E. coli, plague, smallpox or other suspects on the homeland security list," he says. Granger says cards with GMR sensors also could be used for environmental monitoring of various toxins or toxic chemicals in an office building's water or air.
1(current)
2
3
4