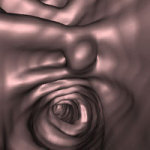 Colon polyp spotted on CT
Dr. Elliot Arons, a gastroenterologist in New York City, told DOTMed News that people shouldn't worry about whether they have standard colonoscopies or virtual colonoscopies, because both work.