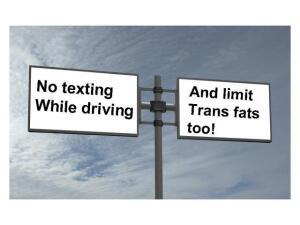 AMA weighs in on health hazards
At the American Medical Association meeting last week in Orlando, FL, physicians attending the meeting voted to support laws against text messaging while driving and also to back legislation banning trans fats in restaurants and bakeries.

According to the AMA, texting while driving has become a public health hazard, since it is a form of communication for millions of people, especially younger drivers, who take their eyes off the road to write.

To combat this trend, AMA members voted to throw their weight behind state legislation banning the use of text messaging while driving.

"Texting while driving takes the driver's attention away from the road, which can lead to accidents," said Peter Carmel, MD, an AMA board member. "A recent study found that text messaging while driving causes a 400 percent increase in time spent with eyes off the road. No one should have to worry that other drivers are focused on texting instead of traffic. This is about keeping people safe on our roads."

The new AMA policy encourages physicians to educate patients on the hazards associated with driving while distracted and will support legislation in states that don't already have bans on text messaging while driving.

The AMA also said it would support a ban on the use of trans fats in all restaurants and bakeries in the US. AMA had said previously that people should limit their consumption of this fat, found in margarine but not in butter.

Now physicians at the AMA say that 100,000 lives a year could be saved by cutting out trans fats altogether. The fat, which was initially thought to be safer than butter, has turned out to be higher in the bad type of cholesterol, called LDL.

The AMA said nothing about buying margarine in supermarkets.